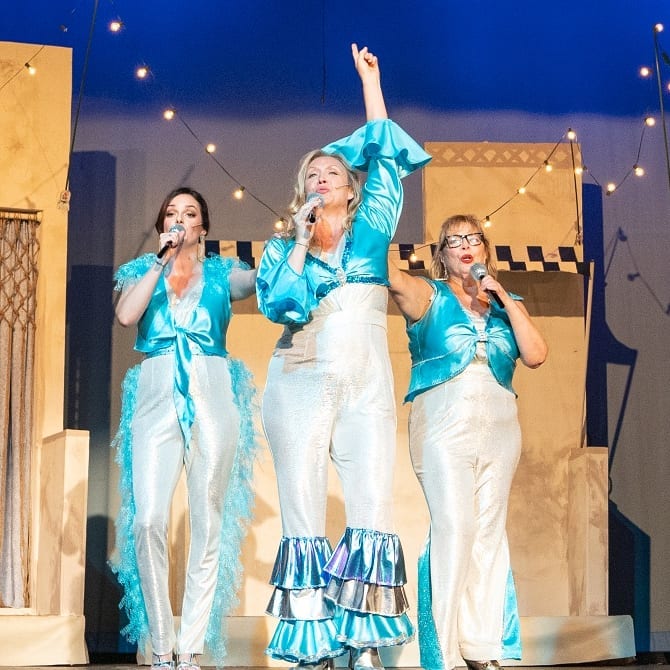 Enid, Ok – It took a lot of waiting, a lot of work, and a lot of patience but finally this weekend will see the very first performance of Mamma Mia in Enid at the Gaslight Theatre.

For director Christianne Chase, it’s been well worth the wait. “It’s been a labor of love truly, and about a three year battle.” Years earlier Chase and her music director Brett Wilenzick had discussed doing the show and were just about to put it together last summer before the national farewell tour of the show extended, thereby having the license rights pulled from the Enid theatre group. However, all of that is behind Chase and she’s ready to showcase the hard work of her cast. “It’s been a long time coming but it’s finally here and we are so ready to open on Friday.”

One of the greatest appeals of the show and the popular movie it spawned is, of course, the source material which is the discography of the Swedish pop group ABBA. “If you grew up in the 70s like I did, you know what (ABBA music) means. It puts a smile on your face, it’s bouncy, it’s happy, it’s just a party and the audience is invited.”

Chase has been a staple of the Gaslight Theatre for many years, performing and helping produce dozens of productions for the long running community theatre. Interestingly enough however Chase has been apprehensive to musicals, of which she’s only produced 5. “They present some special challenges, especially when you do them in the summer time”.

Summer time can be exhausting to shuffle schedules and get to rehearse with a full cast and while that’s been a challenge, the cast has been terrific according to Chase. “We have 26 people in this cast and that’s a little bit larger than a normal comedy or drama” she said “You have to have people who can sing, dance, and act at the same time and I’m just so fortunate to have a wonderful music director Brett Wilenzick and a fabulous choreographer.”

ABBA’s hits tell the hilarious story of a young woman’s search for her birth father. This sunny and funny tale unfolds on a Greek island paradise. On the eve of her wedding, a daughter’s quest to discover the identity of her father brings three men from her mother’s past back to the island they last visited 20 years ago. Music and lyrics were written by Björn Ulvaeus & Benny Andersson and was originally conceived by Judy Craymer.

Mamma Mia will be running from July 19th-21st and the 25th-28th at the Gaslight Theatre at 221 N. Independence. Tickets are $18 dollars for adults, $15 with military ID, $9 for students with Sunday and Thursday showings providing discount admission.