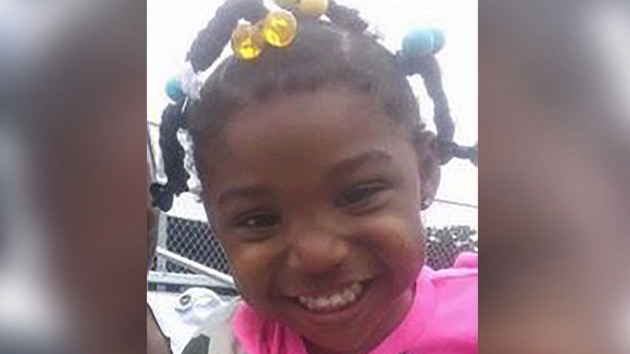 Alabama Law Enforcement Agency(BIRMINGHAM, Ala.) — A body that was found inside a dumpster near Alabama’s most populous city has been identified as 3-year-old Kamille “Cupcake” McKinney, who was abducted from a birthday party more than a week ago.Jefferson County Chief Deputy Coroner Bill Yates confirmed the positive identification in an initial report Wednesday, which stated that Kamille’s remains were discovered Tuesday at a landfill in Gardendale, a northern suburb of Birmingham. The cause and time of death has not yet been determined.The landfill is not far from the public housing community where Kamille was taken. The little girl was playing with other children at an outdoor birthday in the Birmingham neighborhood of Avondale on Oct. 12 when she vanished. A $28,000 reward had been offered to find her.Patrick Stallworth, 39, and Derick Irisha Brown, 29, were initially named persons of interest in Kamille’s disappearance. They were both arrested last week on unrelated charges. Stallworth was arrested on child porn charges and Brown was jailed for violating probation conditions on a previous kidnapping charge.After recovering the toddler’s remains on Tuesday, the Birmingham Police Department announced its plans to charge Stallworth and Brown with capital murder and kidnapping in connection to the case.“We believe that this was something they thought about and acted upon and they saw an opportunity to take a young child, and they did,” Birmingham Police Chief Patrick Smith told reporters Tuesday. “I would like to thank the public for all of the information, all of the tips, all of the video and for their cooperation with this police department during the course of this investigation.”Police do not yet know a motive for the crime.Investigators are also not aware of any connections between the two suspects and Kamille’s family, according to Birmingham Mayor Randall Woodfin.Hundreds of people gathered to honor the life of the young child at a candlelight vigil outside Birmingham City Hall on Wednesday.”A little, innocent, 3-year-old girl was ripped from her family too soon and her absence, make no doubt about it, will leave a hole in our hearts,” Woodfin told the crowd. “Kamille McKinney, affectionately known as Cupcake, we will never forget her name.”The mayor was joined at the vigil by Birmingham’s police chief, who said he believed Kamille had “changed this city.””She made us stop and check ourselves,” Smith said. “Check ourselves to see if we’re doing everything we can to keep our children safe from harm. Check ourselves to see if we’re truly the village that we promise to be. Check ourselves to see if we’re living up to the expectations of tomorrow and watching over our children today.”“Ten days ago, I feel we were a very different city,” he continued. “Maybe we were a little bit too carefree, maybe there’s more that we could have done to watch over this little child. But today we’ve come face to face with the hurt, the pain and the loss of a beautiful little spirit. Let us not take the moment for granted.”Copyright © 2019, ABC Audio. All rights reserved.