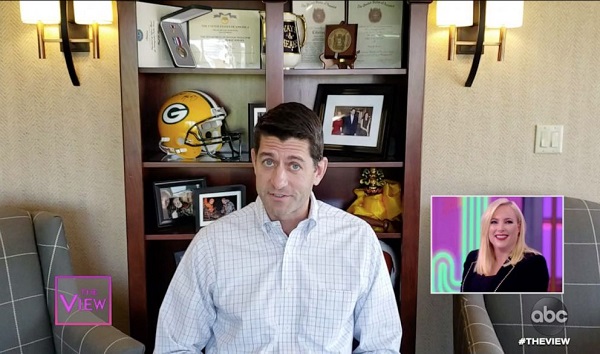 iStock(NEW YORK) — The View co-host Meghan McCain celebrated her 35th birthday on Wednesday, and she had no idea she’d be getting a surprise birthday message from former House Speaker Paul Ryan.McCain celebrated her birthday with The View guests Shooter Jennings and RuPaul’s Drag Race queens Nina West and Monét X Change, all of whom had their own set of surprise gifts for the birthday girl. But nothing compared to the shock factor of realizing that Ryan had a personal message just for her.”Hey Meghan, Paul Ryan here. I just wanted to wish you a happy birthday. I’m sorry I couldn’t be there to celebrate with the rest of the folks of The View’ with you today,” Ryan said in his video message. “I want to make sure you know a lot of us are rooting for you and wishing you a happy birthday today.””You’re a class act. You show what it takes to handle stress and adversity very, very well. You speak from your heart. You know who you are, you know how you stand and you do it with class,” he added. “So, happy birthday and have a great year.”An ecstatic McCain joked, “That’s my boyfriend!” Admitting that he is her “crush,” McCain said that she and husband Ben Domenech laugh about it together.”We’ll just keep that between us and all the millions of people watching,” McCain said.As someone who doesn’t normally care much about age, McCain said that she felt differently about her 35th birthday on Wednesday.”I’m 35, and I’m, like, all up in my feelings about turning 35,” she said. “I never care about age and all of a sudden I’m, like, 35 is, like, real. It’s the age everybody starts talking about kids and stuff, and I still want to dress like Johnny Cash.”Jennings, a country music star, performed his song “Rhinestone Eyes” for McCain, which he also sang at her and Domenech’s wedding in 2017. Later on, Nina West and Monét X Change walked out with a cactus cake and gifts.For McCain’s 2018 birthday, Andy Cohen, a TV personality who is also close friends with McCain, surprised her with a colorful, sequin Jovani jumpsuit worn by Real Housewives of New York cast member Dorinda Medley. McCain’s favorite Real Housewives of Beverly Hills star Ericka Jayne also joined in for the birthday festivities and performed her hit song “Expensive.”Copyright © 2019, ABC Radio. All rights reserved.