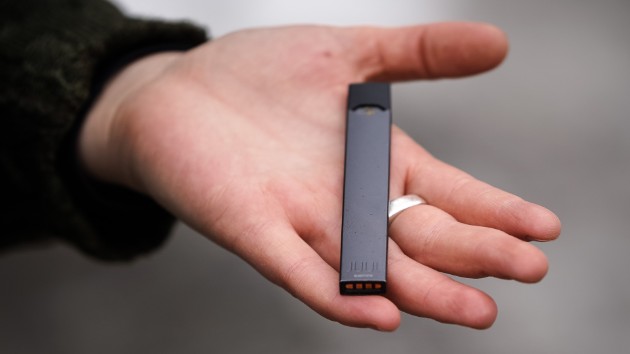 Josie_Desmarais/iStock(NEW YORK) — When 21-year-old Connor Evans was admitted to a Pennsylvania hospital for two and a half weeks in May for lung-related issues, he was shocked.”My lungs were filled up to — 80% of the capacity was filled with fluid,” he told ABC News’ Good Morning America. “So I would cough and — you could tell stuff was coming up. Like, it wasn’t — it wasn’t a healthy cough, for sure.”

Evans said he was 19 when he started vaping and that he never smoked cigarettes or any other products. So says he was surprised when he started having difficulty breathing, allegedly from smoking a Juul product.Now, he’s suing the popular e-cigarette company claiming it failed to warn him about the dangers of vaping.Evans went from being the former captain of his high school hockey team to being placed in a medically induced coma for eight days.”I had to learn how to walk again, basically,” said Evans.

According to the lawsuit, Juul failed to “properly assess and warn about the harm that its products cause to the human lungs and body,” adding the e-cigarette brand “falsely advertises its e-cigarette system as a safe alternative to traditional cigarettes.”The lawsuit also alleges that the e-cigarette company “knew or should have known the potential dangers of its products.””They are selling Juul pods with more nicotine by far than they do anywhere else,” said his attorney, Paul Kiesel. “What the risks are to adolescent brains is sucking down to nicotine, what the risk is to Connor Evans’ lungs long term, is yet to be told.”Juul had no comment when reached about the lawsuit.Currently, the Centers for Disease Control and Prevention and the Food and Drug Administration are investigating the growing list of severe lung injuries that have been reported from vaping.According to the CDC, there has been a total of 1,479 lung injury cases associated with the use of e-cigarette or vaping products from 49 states and 33 deaths in 24 states.No specific brand or substance has been tied to the epidemic, though most patients have reported using THC-related products, according to the CDC.Evans is also alleging that Juul advertised “deliberately to attract minors and young adults, including those who have never even been regular tobacco smokers.” Juul, however, maintains its products and marketing are meant for existing adult smokers looking to switch from combustible cigarettes.Evans said, “It’s highly addictive. You know, it could literally — it could only take one hit and then you know, you’re into it.”He is now taking it upon himself to warn others, specifically minors, about the potential dangers of vaping.”I wish I never took the hit at the college party, ‘cause that was what all started it,” he said. “I wish I never had done it.” Read Evans’ lawsuit in full below: