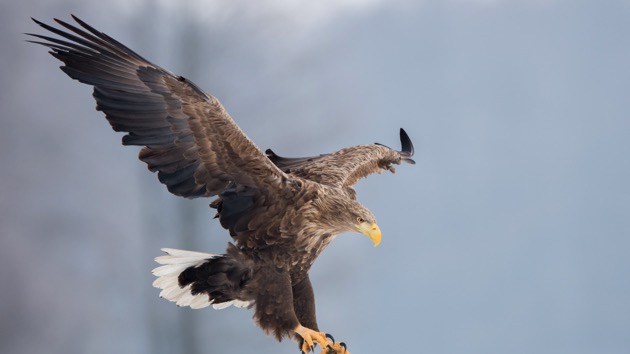 Piotr Krzeslak/iStock(NEW YORK) — The images are stunning, but the cause is bittersweet. Victor the cameraman eagle soars over the Alps with a GoPro on his back to catalogue the impact of temperature rise on Western Europe’s highest mountain range. But the Eagle Wings Foundation, who organizes Victor’s flights, also hopes that the videos will inspire people to care more about the environment.“We want to raise attention about climate change,” Ronald Menzel told ABC News. “Glaciers are disappearing. We know that in 100 years we’re not going to have any glaciers in the Alps.”Menzel is one of the co-founders of the Eagle Wings Foundation, a project that combines photos, video and satellite imagery to document humankind’s effect on the planet. “This project talks about the impact of climate change on the Alps, in a very original way,” he says.Victor is a nine-year-old white tailed eagle. He was raised in captivity and trained by his owner Jacques-Olivier Travers who first had the idea to strap a GoPro to his back.After a quick snack Victor glides down the mountain side, hugging the contours of the terrain and taking advantage of air currents that lift him and aid his flight. He is held by falconer Eva Meyrier on the mountainside at the Plan de l’Aiguille and flies the four kilometres to Jacques-Olivier Travers down in the town of Chamonix as soon as he spots him. Victor arrives at the bottom in just over four minutes.Eagles have excellent eye sight but four kilometres is Victor’s limit, Meyrier explains to ABC News. “We did so many flights with different lengths,” she says, that “you can tell when Victor doesn’t see Jacques-Olivier anymore and it’s more or less 4 km.” Travers always wears orange, and he always stands in an orange target, in a green field, which Victor has been taught to recognise. When he flies greater distances than for kilometres, Victor aims for a green field, knowing that he will find his handler there.Eagles are intelligent, they really learn. Once, says Meyrier, he landed in the Chamonix golf course – the first green space he saw. “He was waiting next to the road … it’s something not normal for an eagle, but he has learned that somebody will pick him up!”“Victor is the perfect ambassador,” says Menzel, as he shows how beautiful the planet is from a unique point of view. “We want to use these amazing images to show the world how beautiful it is and that it’s worth doing things to preserve this environment,” he adds. “We have to act right now so that the changes do not become totally irreversible.”Data shows that the average global temperature has increased by 0.8 degrees centigrade. But in the Alps overall the temperature has increased by 1.5 centigrade. And at Mont Blanc, says Menzel, it’s 2 degrees. “Climate change is affecting the Alps much more than the rest of Europe. Places that have more extreme climates see a bigger impact. The Alps are experiencing changes that are really dramatic.”We are already seeing glacier shrinkage, and alpine wildlife is losing habitat – including the habitat of white tailed eagles like Victor. Humans should take note too, and not only those who live within a risk zone of crumbling glaciers.“Everyone unanimously agrees that mountains are so beautiful,” said Dr. Jan Beutel a researcher at the Swiss Federal Institute of Technology Zurich, talking to ABC News. But they are also a vital water supply around the world. “The Alps represent the ‘water tower’ of Europe and form the watershed of the Mediterranean Sea, the North Sea/North Atlantic Ocean, and the Black Sea” according to the World Glacier Monitoring Service. And not just the Alps; all the water that comes from the Rocky Mountains is fed from glaciers, Beutel explains. Without glaciers, people have to rely on rain only. “You live in Kansas and you don’t think you have anything to do with mountains,” he says. “But it’s all connected.”

From comedian to wartime leader: How President Zelenskyy is helping Ukraine win the information war