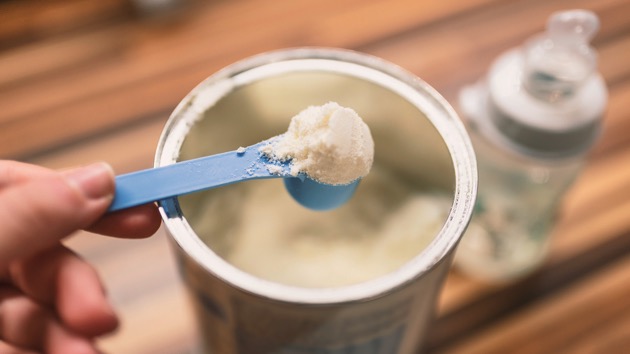 dragana991/iStock(NEW YORK) — Search “black-market baby formula” in Google’s shopping search engine and among the top results will be brands including Holle and HiPP — European baby formulas.For most moms, feeding baby formula comes down to a decision between the U.S. big brands such as Similac or Enfamil. They’re sold in the local grocery store or online at major retailers, are subject to FDA regulation and and reasonably priced, at least when compared with European brands.So why are moms, many in large cities, choosing so-called black-market brands instead? Social media groups like the UES Mommas with 36,000 members are abuzz with advice and discussions on how parents can get their hands on European baby formula like HiPP and Holle.”European standards for organic formulas are better than American fda approved that is controlled by lobbies,” wrote one mom in response to a post asking the group their thoughts on the European brands.That’s a common sentiment in these groups and one New York City mom Marisa Rose agrees with.She gave her baby HiPP from when he was five months until he turned one. She told Good Morning America” that a major consideration was that the European brand did not have corn syrup as an ingredient.”I wanted to give him the healthiest start possible,” she said. Rose told GMA she had difficulty with breast milk supply and since supplementing was necessary, she “wanted to do anything I could to feel better” about not breastfeeding exclusively.Though not FDA-regulated, Rose told GMA she was able to get the formula easily on a website called BabyKindMarket. “It was like ordering anything else online,” she said. “It arrived in two days.”HiPP and Holle do not distribute directly to the U.S. but BabyKindMarket, plus many more web sites like it, make it easy for American parents to order the formula. One storefront in Brooklyn, New York, called Yummy Ganics, promotes itself on Facebook as “your go to shop for all your Holle HIPP” needs. The company delivers same-day locally via Uber.”Our products are not made to be compliant with US regulations. Holle baby food products are not specially licensed to the US market and we don’t have an active distribution to the United States,” a Holle representative said in an emailed statement to GMA. “I’m truly sorry but for legal reasons I’m not allowed to give you, as a US resident, any information or advice regarding Holle products, which could lead to import or consumption in your country.”GMA also reached out to HiPP, but has yet to receive a response.Rose said HiPP smelled cleaner than U.S. formulas and her son did well on HiPP. The only thing Rose didn’t love about it was the cost, she said. European formulas cost about a third more than the organic U.S. brands.”We have no way of knowing for certain that they are meeting nutritional and safety standards,” said Dr. Edith Bracho-Sanchez, a primary care pediatrician and assistant professor of Pediatrics at Columbia University”There are also practical implications as the labels are sometimes in other languages and traditional mixing ratios are different from American formulas,” she said. “Formula that is not properly mixed can have very serious consequences to a baby’s health.”Still, some parents aren’t deterred by any warnings. Besides local moms groups, there are several national groups dedicated solely to Eurorpean baby formulas. The HiPP & Holle Formulas Parent Support Community Facebook group has 13,000 members and the HiPP & Holle – European Baby Formula Support has more than 4,000 .While the trend toward the pricier formulas seems most prevalent among wealthier parents, Bracho-Sanchez said the bottom line is familes who can’t afford to experiment with European brands aren’t missing out. Her advice? “I strongly recommend families steer away from these formulas and either try to breastfeed if they’re able, or discuss with their pediatrician the best option for their baby.”Copyright © 2019, ABC Audio. All rights reserved.

Fifth child tests positive for monkeypox in US: What parents should know

2 more children in US test positive for monkeypox

Minorities are bearing the brunt of monkeypox cases in the US: CDC