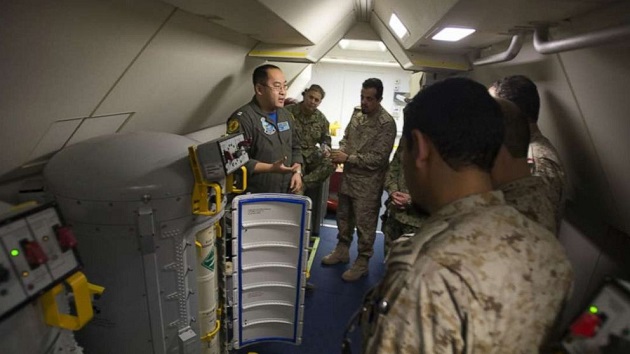 Lt. Fan Yang pictured left. (U.S. Navy)(JACKSONVILLE, Fla.) — A Navy lieutenant and his wife have been arrested for conspiracy to defraud the government, making false statements to investigators and illegally possessing a firearm, according court documents.The two, arrested Oct. 17, have been in custody and appeared in court Wednesday.The indictment accuses Fan Yang, a Navy lieutenant who was stationed in Jacksonville, Florida and held a top secret clearance and his wife, Yang Yang, of attempting to transport inflatable boats through Hong Kong with their final destination being the People’s Republic of China.The documents show Yang, who came to the United States in 1999 and became a citizen in 2006, was actively serving in the Navy in a “sensitive anti-submarine warfare unit.”The pair raised eyebrows when they attempted to purchase engines specifically marked “for military use” through a shell company they set up.The husband and wife, who lived on the base, requested time off to travel to “Disney” but allegedly traveled to Sioux City, Iowa instead, the documents said.It is not immediately known why they traveled to Iowa, and Yang reportedly lied to his Navy supervisors about the trip. Credit card records showed Yang’s purchase of a one way ticket for a Chinese National — who the couple allegedly helped obtain illegal firearms for.In one instance described in court documents, Yang purchased a Sig Sauer MK25 P226 hand gun with the Chinese national’s initials on it with the inscription “Never out of the fight,” engraved on the gun. Court documents show that the two helped get this the man, Ge Songtao, firearms for more than two years.Court documents also show that Yang lied on his background check to acquire the top secret security clearance.Between 2016 and 2019, Yang was listed as the Chief Consultant of BQ Tree Inc., the shell company, court documents say.They were allegedly wired $205,000 over the course of the three years by Songtao’s company. Copyright © 2019, ABC Audio. All rights reserved.