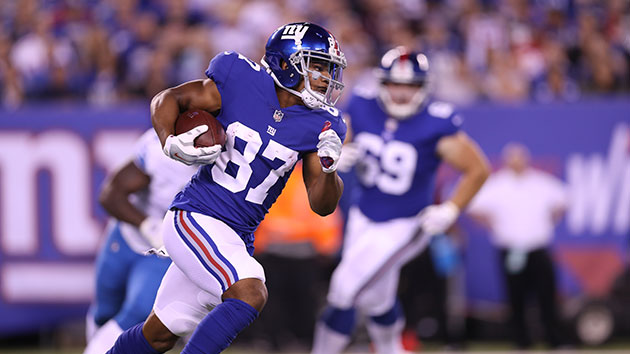 Allen Kee/ESPN Images(NEW YORK) — New York Giants wide receiver Sterling Shepard is recovering from his second concussion of the season, but is hopeful he will see the field again in 2019.”I’m feeling great,” the Giant told ABC Audio, while volunteering for Make A Difference Day. A father himself, Shepard was helping Pampers fulfill its commitment to install 5,000 changing tables across North America by 2021.Shepard continued, “I’ve been feeling good for about two weeks now, so I’m just kind of waiting on doctors to give me the green light.”Shepard was placed in the NFL’s concussion protocol after the Giants’ season-opener against the Dallas Cowboys, and a few weeks later following the team’s loss to the Minnesota Vikings.He concedes “it’s tough” sitting out games, including this past Sunday’s loss to the Arizona Cardinals, and he did not offer a specific date for when he expects to return.Shepard has practiced on a limited basis since suffering his second concussion, however, and assures fans, “I’ll be back here pretty soon and I’m looking forward to it.”Shepard also shared his feelings on youth participation in football and the play of Giants’ rookie Daniel Jones.A soon-to-be father of two, Shepard tells ABC Audio in spite of his concussion history, he would let his children play football:”If that’s what they want to do, if that’s their true passion and what they love, I’m all for it.”When discussing Jones, Shepard says the quarterback is “doing a great job passing, running, extending the play,” and believes teammates “need to do a better job for him I feel like… giving him a little bit more time and catch the ball when we’re open.” Shepard is one of seven other NFL dads, Marvin Jones of the Detroit Lions and Derek Wolfe of the Denver Broncos among them, volunteering as part of Pampers’ commitment to install changing tables.Copyright © 2019, ABC Audio. All rights reserved.