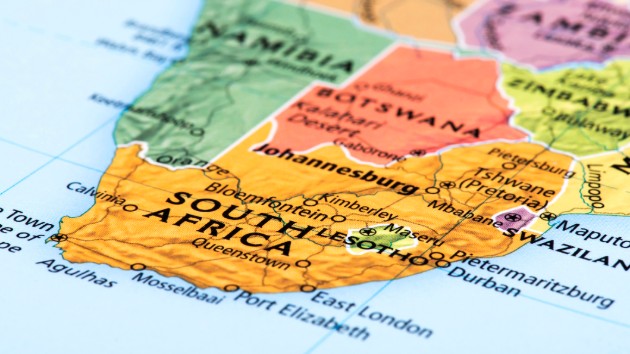 omersukrugoksu/iStock(LONDON) — Russia landed the world’s heaviest bomber in South Africa on Wednesday in a rare show of military cooperation between the two nations, as Russian President Vladimir Putin hosted African leaders at an economic forum. Two Tupolev Tu-160 strategic bombers, which are supersonic Soviet-era aircraft capable of launching nuclear missiles, touched down at a South African Air Force base on the outskirts of the capital, Pretoria. It was said to be the first time that Tu-160 bombers have ever landed on the African continent. The Russian warplanes were escorted on arrival by two fighter jets of the South African Air Force, according to a statement from the South African National Defense Forces, which noted the “strong historical links with diplomatic relations” between Russia and South Africa. “The ‘Military to Military’ relations between the two countries is not solely built on struggle politics but rather on fostering mutually beneficial partnerships based on common interests,” the South African National Defense Forces said in the statement Wednesday.Russia’s Ministry of Defense said in a separate statement that the deployment of the aircraft to South Africa reflects a “strategic partnership” and is intended to help “develop bilateral military cooperation.” The arrival of the nuclear-capable bombers in one of Africa’s most industrialized countries appeared to coincide with the start of the first-ever Russia-Africa summit, meant to increase Moscow’s clout on the world’s second-largest, second-most populous continent. South African President Cyril Ramaphosa was among the African leaders who met with Putin on the sidelines of the two-day event in the southern Russian city of Sochi.Dozens of African heads of state and other top officials attended the high-level summit, where Putin expressed a renewed interest in Africa and hailed the continent’s “enormous potential for growth.” He noted how Moscow had written off more than $20 billion in African debt owed to the Soviet Union, which enjoyed strong economic and political ties across Africa until its collapse in 1991. “Our country resolutely supported Africans in their struggle for independence and sovereignty,” Putin said in his speech at the summit’s gala reception on Wednesday. “Our specialists helped African states overcome poverty and develop their economies. They took part in the construction of industrial, agricultural and social facilities, including hospitals and schools. They also helped Africans create and equip combat-capable forces.”The Russian leader called for trade with Africa to double within the next four to five years. He also touted current and potential projects to help African nations tap into the continent’s vast resources. Several Russian firms are implementing “promising oil and gas projects” across Africa, while the Kremlin-controlled Alrosa, the world’s top diamond producer, is developing diamond deposits on the continent and Russia’s state-owned nuclear company Rosatom is looking to build the nuclear industry, according to Putin. Russia joins China and the United States in the push for geopolitical influence in Africa, which is home to 1.5 billion people and some of the world’s fastest growing economies. The Kremlin said a package of trade, economic and investment agreements are expected to be signed following the Russia-Africa summit. “Many Russian companies have long and successfully worked with partners from the most different sectors of the African economy and plan to expand their influence in Africa,” Putin told the crowd in Sochi on Wednesday. “We of course will provide support at the state level.” Copyright © 2019, ABC Audio. All rights reserved.