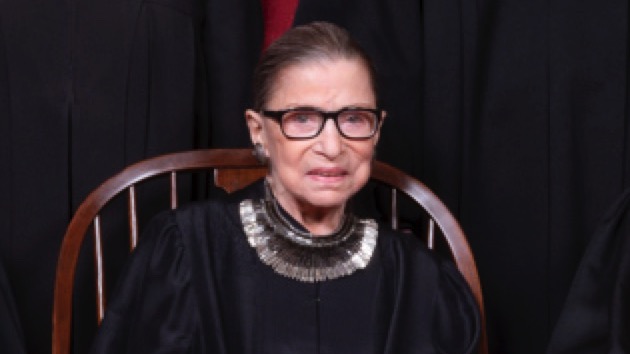 Fred Schilling, Collection of the Supreme Court of the United States(WASHINGTON) — Supreme Court Justice Ruth Bader Ginsburg has been awarded the $1 million Berggruen Prize.The award is given annually to “thinkers whose ideas have profoundly shaped human self-understanding and advancement in a rapidly changing world,” according to a statement from the Berggruen Institute.Ginsburg, 86, will donate the money to charity or any nonprofit organization that she chooses, the institute said.The associate justice was nominated to the Supreme Court in 1993 by former President Bill Clinton, becoming the second woman, following Sandra Day O’Connor, to serve on the nation’s highest court.Ginsburg was chosen over more than 500 nominees, including five other finalists that the institute said “included some of the world’s most renowned thinkers from various fields including social science, global justice, animal rights, and bioethics.””It is a true honor to have Supreme Court Justice Ruth Bader Ginsburg as the recipient of this year’s Berggruen Prize,” said institute founder and chairman Nicolas Berggruen. “I am delighted the Jury has chosen to honor such a prolific leader in the field of jurisprudence.”Ginsburg will receive the award in a private ceremony on Dec. 16 at the New York Public Library.Currently the oldest justice serving on the bench, Ginsburg has recently faced health issues including pancreatic cancer. She was treated for a “localized malignant tumor” on her pancreas in August and had malignant nodules removed from her lung in a New York hospital in December 2018.Copyright © 2019, ABC Audio. All rights reserved.

Homeless college student walks over 500 miles to raise money for homelessness
Drive-thru voting, wait-time technology and more safety measures at the polls this election
Major fire threat on way to California while fire danger and winter storm expected in Colorado Saturday
Man apologizes as he’s sentenced to life in prison for Mackenzie Lueck slaying
Rochester police offering $10,000 reward for information on deadly mass shooting
Wunmi Mosaku would “run for the hills” if she were actually in her Netflix horror movie ‘His House’