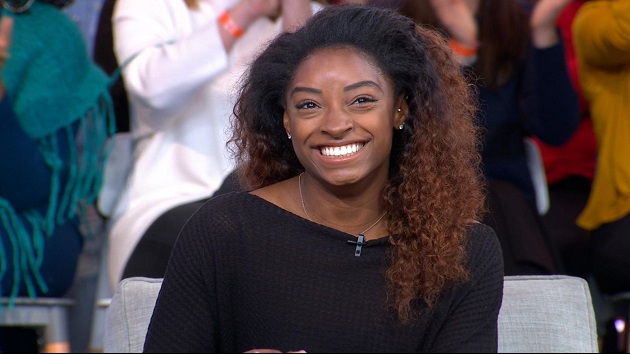 ABC News(HOUSTON) — If there ever was a bar for first pitches at a baseball game, let alone in the World Series, Simone Biles — the most decorated gymnast in the world — just set it to an impossible standard.The Houston native threw out the first pitch for Game 2 of the World Series on Wednesday and infused it with her own personal flair by flipping and twisting backwards on the pitcher’s mound before sending the ball over to Astros’ outfielder Jake Marisnick.Marisnick grinned widely, laughed and clapped as he watched Simone’s acrobatics. After catching the ball, he ran up to the 25-time gymnastics world champion and autographed it for her as a souvenir.This isn’t the first time Biles established herself on the pitcher’s mound. In July 2016, she flipped in the air before throwing the first pitch at another Astros home game. Despite a great start for the Astros, the team lost Game 2 to the Washington Nationals, 12 to 3, on Wednesday. The team heads into the third game in the series, which will be hosted by the Nationals, this Friday starting at 8:07 p.m. ET on FOX.

Tiger Woods returns to Masters with strong opening round