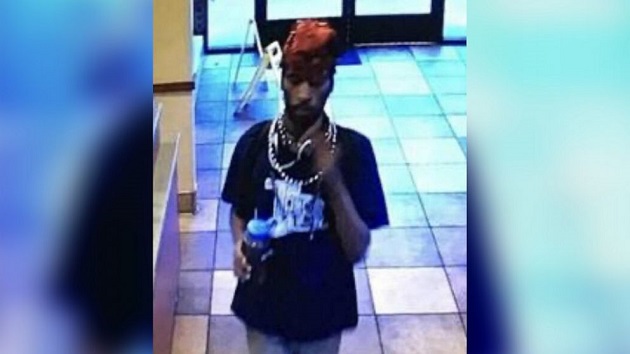 Tallahassee Police Department(TALLAHASSEE, Fla.) — A suspect who poured gasoline on a Taco Bell customer and then set them on fire is being hunted by Florida police for attempted murder after the victim was left with serious injuries.The incident occurred on Wednesday at approximately 6:18 p.m. at a Tallahassee Taco Bell restaurant when the suspect entered the establishment, doused the female victim with gasoline and then lit them on fire.The suspect has been identified as Mia Williams, 32, “who identifies as a black female,” according to a statement released by Officer Rachel Denmark of the Tallahassee Police Department.Williams fled the scene of the crime on foot and police are currently looking for her whereabouts.“Williams was last seen wearing a black shirt with white writing, tan capri styled pants, and a red wrap on her head. Williams also had several necklaces around their neck,” the statement read.The victim, who currently remains unidentified, was taken to hospital by helicopter after suffering serious injuries.Investigators don’t yet know if the suspect knew the female victim involved in the attack or if it was done at random.Tallahassee Police Department spokesman Damon Miller told the Tallahassee Democrat: ”At this time, (investigators) are on scene trying to basically solve this puzzle, to figure out why this heinous crime was committed.”Copyright © 2019, ABC Audio. All rights reserved.