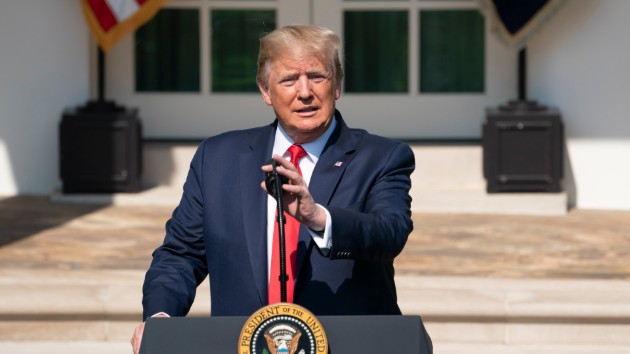 Official White House Photo by Joyce N. Boghosian(WASHINGTON) — President Donald Trump, facing harsh criticism from both Republicans and Democrats for his abrupt decisions on Syria, claimed a “breakthrough” on Wednesday, saying the ceasefire on Turkey’s border with Syria is “permanent.””Early this morning, the Government of Turkey … said that they would be stopping combat and their offensive in Syria, making the ceasefire permanent, and it will indeed be permanent,” Trump said in a formal statement from the White House.Trump said sanctions the U.S. imposed on Turkey would be lifted unless something “happens that we’re not happy with.””Today’s announcement validates our course of action,” he said, citing the criticism. “Now people are saying, ‘Wow, what a great outcome."”He claimed that the ceasefire is the sole outcome of U.S. efforts. However, this announcement comes a day after Russian President Vladimir Putin and Turkish President Recep Tayyip Erdogan announced they had reached a separate deal for control of northeastern Syria — where U.S forces have been withdrawn.”This was an outcome created by us, the United States, and nobody else,” Trump said. “No other nation, very simple. We’re willing to take blame and we’re also willing to take credit. This is something they’ve been trying to do. For many, many decades since then.””Let someone else fight over this long-bloodstained sand,” he said. “We’ve done a great job and now we’re getting out.”Just after touting success, though, the president seemed to doubt his own assessment saying permanent is “questionable” in that region.”However, you would also define the word permanent and that part of the world is somewhat questionable,” Trump said.The president first teased the announcement on Twitter Wednesday morning.In his tweet, the president touted “big success” on the Turkish-Syria border, heralding that a safe zone has been created and that the ceasefire has held.”Big success on the Turkey/Syria Border. Safe Zone created! Ceasefire has held and combat missions have ended. Kurds are safe and have worked very nicely with us. Captured ISIS prisoners secured. I will be making a statement at 11:00 A.M. from the White House. Thank you!” Trump tweeted.The president’s tweet comes a day after Russian President Vladimir Putin and Turkish President Recep Tayyip Erdogan announced they had reached a separate deal on how to divide up and control northeastern Syria — from which U.S. forces recently withdrew.The deal came just before the U.S.-Turkish halt in hostilities reached its deadline, with a senior Trump administration official touting it as “one of the best ceasefires I’ve ever seen.”But as the remaining 1,000 U.S. troops withdraw from northeast Syria at President Donald Trump’s command, critics have blasted Trump and his administration for ceding this territory to Turkey, Russia and Syrian President Bashar al-Assad, who has overseen a brutal war against his own people, and giving up leverage to accomplish U.S. goals in the region, including ensuring the defeat of the Islamic State and expelling Iranian forces from Syria that threaten U.S. allies, especially Israel.After the announcement, the U.S. special envoy for Syria told the Senate Tuesday that Putin took “a page from what we have done” and came up with a “similar ceasefire in many regards for the rest of northeast Syria, except the Turks got even less” — meaning Russia got more out of its negotiations with Turkey than the U.S. team.The deal between Erdogan and Putin calls for Syrian Kurdish forces and their weapons to be removed from a buffer zone the length of the border in northeastern Syria — an expansive area where these forces live now that extends 30 kilometers (18.6 miles) in from the border. Turkey would maintain control of the portion it now has, thanks to its agreement with the U.S., while Assad’s forces, backed by Russia, would secure the rest of it.This is a developing story. Please check back for updates. Copyright © 2019, ABC Audio. All rights reserved.