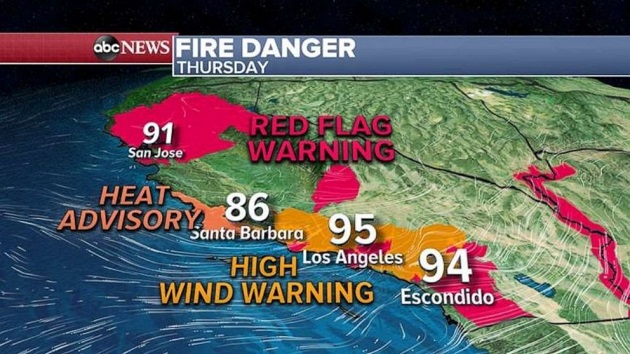 ABC News(NEW YORK) — Wildfires are erupting across California as dry air, dangerous winds and high temperatures take over the Golden State. The Kincade wildfire began in Sonoma County in Northern California’s wine country Wednesday night. As winds reached up to 76 mph, the blaze exploded to 10,000 acres overnight.Cal Fire spokesperson Amy Head said the fire is wind driven and it’s hard for crews to keep up. “We just can’t keep ahead of it….we are almost chasing it and trying to catch up with it,” she said Thursday morning.The community of Geyserville is under mandatory orders to evacuate immediately, the Sonoma County Sheriff’s Office warned Thursday morning. The fire is 0% contained and the cause is under investigation.In Southern California, winds are expected to be even stronger due to the higher mountain range, creating Santa Ana winds.A heat advisory has also been issued for Southern California with temperatures in the 90s from San Diego to Los Angeles. Dry air, high temperatures and winds all contribute to the spread of wildfires.