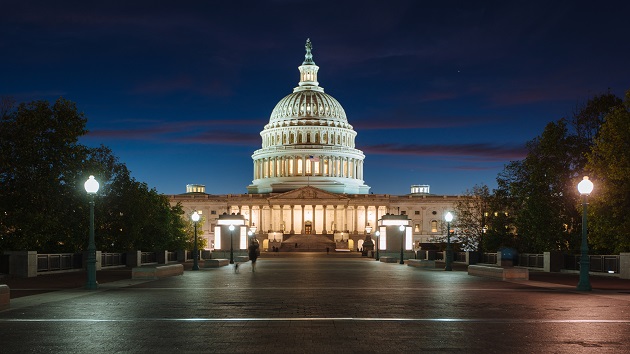 erick4x4/iStock(WASHINGTON) — The House of Representatives is expected to vote on Thursday on a resolution laying out the next steps in the impeachment process, according to a senior Democratic aide, after weeks of criticism from Republicans and President Donald Trump that the inquiry was unfair, illegitimate and being conducted in secret

In a letter to colleagues, House Speaker Nancy Pelosi said the resolution “establishes the procedure for hearings that are open to the American people, authorizes the disclosure of deposition transcripts, outlines procedures to transfer evidence to the Judiciary Committee as it considers potential articles of impeachment, and sets forth due process rights for the President and his Counsel.”

The vote on this resolution comes as Republicans and the White House have argued against Democrats’ handling of the impeachment process, although it’s unlikely the resolution will go far enough to satisfy Republicans’ demands.

The bill will by introduced by House Rules Committee Chairman Jim McGovern, who tweeted the resolution will “ensure transparency and provide a clear path forward.”

Republicans have slammed what they say is a lack of transparency in the impeachment process, as Democrats have called nearly a dozen officials to give depositions behind closed doors. Republicans have called for transcripts of that testimony to be made public, have accused Democrats of cherry-picking information to be released or leaked, and have argued President Trump deserves to have counsel present to cross-examine witnesses.

Democrats, led by House Intelligence Committee Chairman Adam Schiff, have promised to make their inquiry public once they are finished gathering information in the classified setting.

Two weeks ago, Pelosi considered holding a vote to formally declare an impeachment inquiry, but ultimately held off.

“The timeline will depend on the truth-line,” Pelosi said.