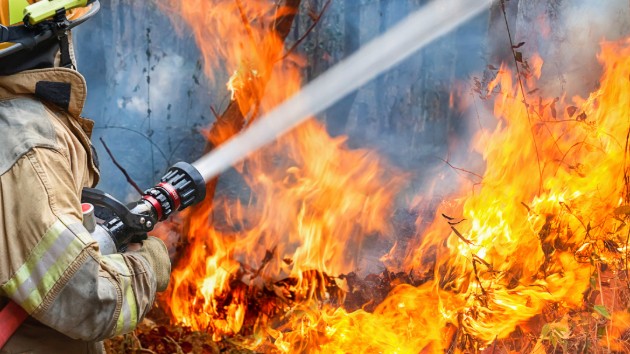 Toa55/iStock(LOS ANGELES) — Wildfires are scorching thousands of acres in California and forcing tens of thousands of people from Los Angeles to wine country to evacuate. California Gov. Gavin Newsom declared a state of emergency Friday in Sonoma and Los Angeles counties where two of the most intense wildfires are growing. Tick FireThe Tick Fire, which erupted on Thursday in Los Angeles County, has covered 4,300 acres and is only 5% contained. Fueled by ferocious 50 mph winds, it is threatening homes in Santa Clarita.Flames jumped over a freeway overnight, lighting up guardrail posts like tiki torches and illuminating the way for firefighters.More than 600 firefighters have been on the scene, racing from one house to another and extinguishing brush fires that are threatening homes.Police officers went door-to-door in the middle of the night, telling residents to leave. About 50,000 people have been ordered to evacuate.All Los Angeles Unified School District campuses in the San Fernando Valley were closed Friday as the blaze rages on.The cause is unknown.And red flag warnings remain in effect across Southern California Friday.”The erratic winds today pose a challenge for our firefighters as they may change direction and intensify, posing a greater threat to homes,” Cal Fire officials said Friday morning.Winds are easing in the Los Angeles area but high winds continue from San Diego County to San Bernardino through Friday afternoon.Fires have also erupted in San Bernardino County and San Diego County.Another round of Santa Ana winds could return to Southern California by Sunday into Monday.Kincade FireMeanwhile, hundreds of miles north in Sonoma County — the heart of Northern California’s wine country — the Kincade Fire has consumed 21,900 acres and is just 5% contained.About 2,000 people are under mandatory evacuation orders, and the blaze has destroyed at least 21 homes.The California utility company PG&E on Wednesday preemptively turned off power to about 28,000 customers in Sonoma County in an attempt to avoid fires.The utility also said in a statement there appeared to be a “broken jumper” on a transmission tower near where the Kincade Fire is believed to have started.And for parts of Northern California, the worst may be yet to come.Strong, dry winds, which fuel fires, are forecast to move into the region this weekend.Winds could reach 60 mph near Sacramento and Redding Saturday night and into Sunday.The National Weather Service says this next round of dangerous fire weather could be the strongest of the year for the area and could be the worst wind event since the 2017 Wine Country fires.”We do think it will be possibly the strongest offshore winds we have seen in years,” PG&E meteorologist Scott Strenfel added Thursday night.PG&E, which provides electricity to millions of Californians, is warning that the weekend may bring one of its biggest planned power shutoffs, though it’s not yet clear exactly how many customers will be impacted.The preemptive shutoffs are for safety, the company said, in an effort to keep fires from sparking.But the governor is criticizing PG&E for what he says were “years and years of greed” and “years and years of mismanagement.””That greed has precipitated in a lack of intentionality and focus on hardening their grid, undergrounding their transmission lines. They simply did not do their job,” Newsom said at a news conference Friday. “We will hold them accountable for the business interruption and costs.”PG&E was found responsible for dozens of wildfires, including last year’s Camp Fire — the deadliest fire in California’s history. The Nov. 2018 Camp Fire in Northern California, which killed dozens, was sparked by power lines owned and operated by PG&E, Cal Fire said in May.PG&E filed for bankruptcy after losing billions from the Camp Fire.”PG&E right now is very gun-shy of taking any risks” and doesn’t “want to be liable if something goes wrong,” Stephanie Pincetl, a professor at UCLA’s Institute of the Environment and Sustainability and director of the California Center for Sustainable Communities, told ABC News earlier this month. “They’re trying to manage their risk.””PG&E has a very, very, very extensive grid,” Pincetl said. “So it means that you have hundreds of thousands of miles really of transmission that you need to be very vigilant about in keeping upgraded, and that includes brush clearing.”The preemptive shutdowns also show “that PG&E, the public utilities commission and regulators have not really worked to figure out strategies to mitigate the potential of wildfire driven by our electricity infrastructure,” Pincetl said.”The utilities have known for awhile now, I would say several years,” Pincetl said, “that change in climate and the accumulation of brush around the pathways of the grid-lines that there is an increased chance of wildfire being caused by a spark from the grid or some other incident.”PG&E stock fell toward a record low on Friday, according to MarketWatch.com.