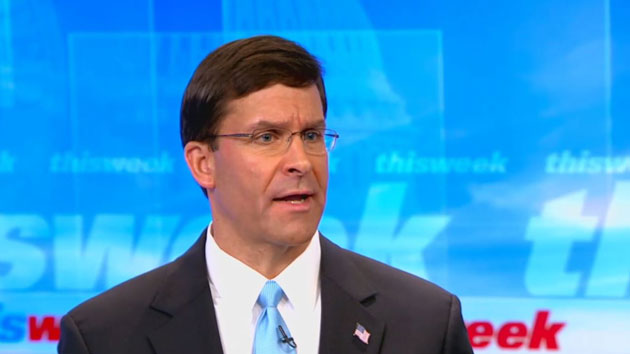 ABC News(WASHINGTON) — Calling it a “bold decision,” the defense secretary offered more details on the mission that led to the death of Islamic State leader Abu Bakr al-Baghdadi on ABC’s “This Week” Sunday.”This is a great day for America, it’s a great day for the world,” Defense Secretary Mark Esper said. “The president made a bold decision to launch this raid and our military service members and our interagency partners executed brilliantly.””[Al-Baghdadi was] a thug, a murderer and the world is better off without him,” he added later.President Donald Trump announced the death of the ISIS leader in an address to the nation Sunday morning. Al-Baghdadi was targeted Saturday in a nighttime raid by U.S. special operations forces in Syria.The secretary of defense also confirmed that two of al-Baghdadi’s wives were killed in the raid, in addition to the three children killed that Trump described.Esper also responded to a statement on the raid from Diane Foley, the mother of freelance journalist James Foley who was executed by an ISIS militant in 2014.”She’s right, I think all the praise goes to our service members and our intelligence professionals and others who took this on,” he said. “And the message is, if you’re a leader in ISIS, if you’re a leader in a terrorist group we are going to come after you and we will hunt you relentlessly.”Al-Baghdadi was last seen alive in a video in April, in which he discussed the loss of an ISIS stronghold and praised attacks in Sri Lanka that killed more than 250 people.Esper would not comment on the location of al-Baghdadi’s body following the operation.The U.S. had been considering a plan to leave some troops in eastern Syria to protect oil fields following a conflict between Turkey and Kurdish forces.Esper confirmed that the U.S. would use some mechanized forces to protect oil fields.”We are now taking some actions, I’m not going to get into the details, to strengthen our position in Dayr az Zawr to ensure that we can deny ISIS access to the oil fields,” he said at a press conference in Brussels on Friday.Copyright © 2019, ABC Radio. All rights reserved.