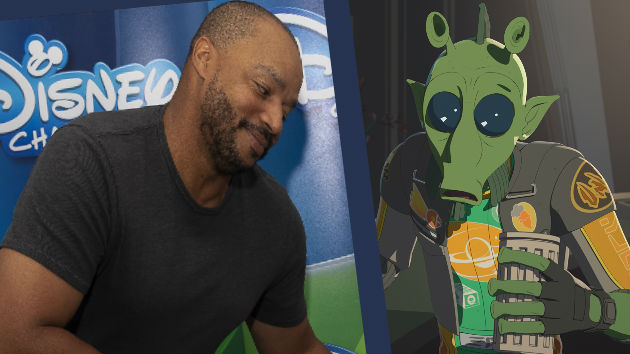 Fazon is a Rodian, the same green-skinned, bug-eyed alien species Han Solo shot in the Mos Eisley cantina in Star Wars: A New Hope.  And yes, the name Fazon is pronounced the same as Donald’s.  It’s the only time a Star Wars character shared a last name with the actor who played him — and Faison’s stoked that his name’s an official part of the Star Wars universe.

“Pretty Cool?!  It’s the best thing ever!” Faison tells ABC Audio. “‘Faison’ is canon. It’s not spelled the same, but Hype Fazon — ‘Faison’ is how you say it. And so somewhere out there in space, there can always be a Fazon story in Star Wars.”

So who exactly is Fazon?  He’s a pilot whose character’s cockpit skills match those of Wedge Antilles, Luke Skywalker’s one-time wingman who survived the entire original Star Wars trilogy — and helped blow up the second Death Star, to boot.