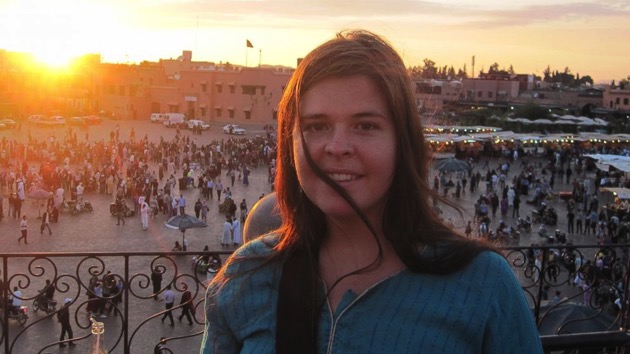 Kayla Mueller seen on her travels in this undated photo. (Courtesy of the Mueller Family)(PRESCOTT, Ariz.) — The family of Kayla Mueller, a humanitarian worker from Arizona who was held captive, tortured and killed by ISIS, said it brought them great solace to know that the U.S military operation that ended with the death of the terrorist group’s leader had been dedicated to her.President Donald Trump announced the death of the ISIS leader and founder Abu Bakr al-Baghdadi in a Sunday morning address that mentioned Mueller by name, calling her a “beautiful young woman” who died while trying to “help people.””We just learned that the whole thing was dedicated to Kayla thanks to General [Mark] Milley and it’s very touching,” her father, Carl Mueller, told ABC News on Sunday. “President Trump mentioned her today in his statement and he mentioned that he deserved what he got for what he did to Kayla. … she’s not forgotten, and that’s important.”Mueller, 26, was on a humanitarian mission in Turkey on Aug. 3, 2013, when ISIS kidnapped her after crossing the Syrian border to visit a hospital. In February 2015, U.S. officials confirmed that she had died while in ISIS custody, but her body was never recovered.Sitting beside his wife, Marsha Mueller, in an emotional interview at their home in Arizona, Carl Mueller, also revealed that the couple once traveled to Irbil for a face-to-face meeting with Umm Sayyaf, wife of ISIS militant Abu Sayyaf. Delta Force killed Abu Sayyaf in May 2015 and captured Umm Sayyaf, who previously held Kayla Mueller captive in their home for al-Baghdadi to sexually assault.Carl Mueller said they went “against the advice of the FBI,” over the summer to find out what may have happened to their daughter’s remains — or if she could still be alive.”When we talked to Umm Sayyaf, we found we got more information out of her, not just us, the people backing us — they got information from her that neither the Kurds or the US government had got in the two days that we were there,” Carl Mueller said. “It makes a big difference when you are talking to these people with a humanitarian attitude. We don’t care what you did, what you’ve done — we just want to know what you know about our daughter to bring her home.”Through meeting with Sayyaf, and others who had contact with Kayla Mueller, they said they learned that she was held in solitary confinement, tortured, and raped by al-Baghdadi.”We learned from women that were ransomed out by their governments that she said she was held in many cold, dark places, she was raped by al-Baghdadi, we know that to be a fact,” Carl Mueller said. “She was murdered by him or someone in his organization. That’s what we’re pursuing and that’s what we hope that President Trump will help us with.”The couple said they had filed requests under the Freedom of Information Act to gather more information about how she may have died. The requests were denied, and they’re considering taking legal action to receive documents related to her death.”My only real goal is to be bring Kayla home, back to Arizona, where she grew up and was born. So that’s what we’re trying to do,” Marsha Mueller told ABC News.In his public address on Sunday, Trump said U.S. special operations forces targeted al-Baghdadi in a nighttime raid in Syria on Saturday. The troops eventually cornered him and three young children that he had taken captive.Realizing that there was no way out, he detonated a suicide bomb inside of a dead-end tunnel, killing himself and the three children.”He was a sick and depraved man. And now he’s gone. Baghdadi was vicious and violent. And he died in a vicious and violent way, as a coward, running and crying,” Trump said Sunday.He also noted that al-Baghdadi had committed “especially heinous” murders of innocent Americans in addition to Kayla Mueller, including freelance journalists James Foley and Steven Sotlof and humanitarian worker Peter Kassig.”Think of the things he did to Kayla. … What he did to her was incredible,” Trump said Sunday. “He kept her in captivity for a long period of time; he kept her in captivity, his personal captivity. She was a beautiful woman, beautiful young woman, helped people. She was there to help people.””And he saw her and he thought she was beautiful and he brought her into captivity for a long period of time and then he killed her. He was an animal. And he was a gutless animal,” he added.Copyright © 2019, ABC Audio. All rights reserved.