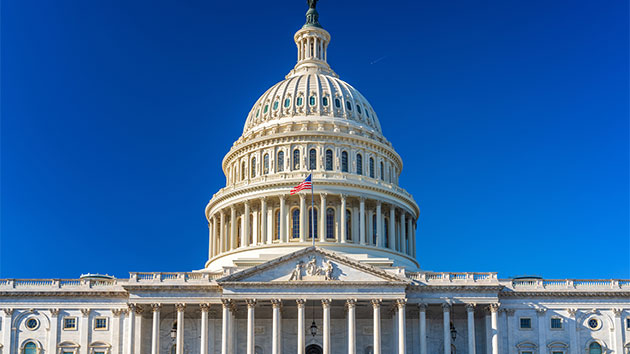 sborisov/iStock(WASHINGTON) — Former Rep. John Conyers Jr., D-Mich., died at home while he was asleep, a family spokesperson confirmed. He was 90 years old.”Today, the city of Detroit, The United States and the world lost a fearless civil rights leader and hero, Congressman, John James Conyers, Jr.,” a statement on behalf of the Conyers family said. “Congressman Conyers was a devoted father and husband and his world revolved around securing justice against racial and economic discrimination. A founding member of the Congressional Black Caucus and throughout his 53 years in U.S. Congress, Conyers authored or sponsored legislation that impacted the lives of millions; including the Martin Luther King Holiday Act. His legacy and advocacy for human rights will live on forever.”He was the longest serving African American member of Congress in U.S. history.”My husband was a fighter; when your back was up against a wall, he was right there with you,” Monica Conyers said in a statement Sunday night. “Not just for me, but for everyone.” Conyers announced his retirement in 2017, citing health concerns, but also as he was facing multiple allegations of sexual harassment.”I am retiring today, and I want everyone to know how much I appreciate the support, the incredible, undiminished support I’ve received across the years,” he said on Mildred Gaddis’ radio show, calling in from a hospital in Detroit.Later, Rep. Sheila Jackson Lee, D-Texas, read a statement from Conyers on the House floor.”Given the totality of the circumstance, of not being afforded the right of due process in conjunction with current health conditions, and to preserve my legacy and good name, I’m retiring. I hope my retirement will be viewed in the larger perspective of my record of service as I enter a new chapter,” Lee said the statement read.Conyers was the first high-profile national political figure to fall in a wave of public sexual harassment allegations across the country. A congressman since 1965, he was the longest-serving member of the House, a founding member of the Congressional Black Caucus and a civil rights icon. He was the ranking member of the House Judiciary Committee before he stepped down.Conyers was born in Detroit in 1929, attended public schools there and went on to earn a bachelor’s degree at Wayne State University and then a law degree at Wayne State Law School. He served in the Michigan National Guard from 1948-1950, the U.S. Army from 1950 to 1954 and the U.S. Army Reserve from 1954 to 1957, according to his House biography.His resignation left an open seat in the House of Representatives and Rashida Tlaib ran unopposed in 2018. She and Rep. Ilhan Omar, D-Minn., became the first Muslim women to serve in Congress.During a campaign rally in Detroit for Sen. Bernie Sanders, I-Vt., Tlaib recognized, “our forever Congressman John Conryers Jr.””Never, he never once wavered in fighting for us,” she told the crowd. “He stood on issues of equality and civil rights for our people. He served us and fought for us for over 50 years.””Congressman John Conyers was a lifelong Detroiter who was deeply committed to the city and to those he represented,” Michigan Gov. Gretchen Whitmer said in a statement. “His impact on our state, whether by spearheading reforms in criminal justice and voting rights in Congress or through his lifetime of civil rights activism, will not be forgotten. I extend my deepest condolences to Congressman Conyers’ family for their loss.”

More Democrats Than Ever Support The Palestinian Cause, And That’s Dividing The Party