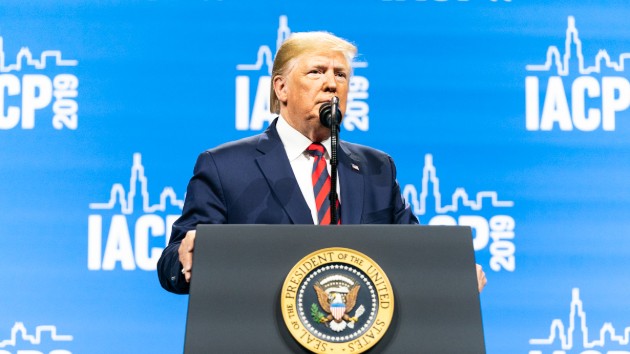 Official White House Photo: Shealah Craighead(CHICAGO) — Before a friendly audience of police chiefs in Chicago, President Donald Trump on Monday slammed the city’s police superintendent after he boycotted Trump’s speech citing Chicago’s “core values” and his “personal values” — and he also took a shot at actor Jussie Smollett. Over the weekend, the superintendent, Eddie Johnson, said he had decided not to attend.

“I have to take into account, not just my personal feelings about it, but our core values as a city,” Johnson said, according to Chicago ABC station WLS-TV. “We are nothing without trust and with some of our communities under siege, it just doesn’t line up with our city’s core values along with my personal values.” Trump called Johnson’s comment “very insulting … after all I’ve done for the police.” He said Johnson “should be here, because maybe he should learn something.” The president cited high crime rates in Chicago to argue that Johnson was “not doing his job.”“Afghanistan is a safe place in comparison,” he said, to laughter from the police chiefs at the International Association of Chiefs of Police Annual Conference and Exposition. Organizers said about 4,000 people attended. “Five-hundred sixty-five people were murdered last year, and it’s a shame, and I want Eddie Johnson to change his values, and to change them fast,” Trump said.The president has had a tumultuous relationship with the city of Chicago. Monday marked the president’s first visit to the city as president. As a candidate, he attempted to hold a rally there in 2016, but it was cancelled due to large protests. In 2017, Trump threatened to “send in the Feds” to solve Chicago’s crime problem.

“If Chicago doesn’t fix the horrible ‘carnage’ going on,” he tweeted then, “I will send in the Feds!” Over 25 groups planned to protest the president’s visit to the Windy City Monday, and several hundred gathered outside the city’s Trump International Hotel & Tower, where the president was due to attend a fundraiser Monday. But at the police chiefs event, Trump emerged to campaign rally-style music and was frequently applauded — including when he blasted the Chicago police superintendent.“He’s not doing his job,” Trump said of Johnson, listing statistics of those murdered and shot in Chicago. He criticized Johnson and “stupid politicians who have no idea what the hell they’re doing.” Trump also criticized Empire actor Jussie Smollett, who earlier this year said he was attacked by people who supported the president. Police later alleged it was a hoax. “Then you have the case of this wise guy, Jessie Smollett, who beat up himself,” Trump said Monday. As he has said previously, Trump said Smollett had carried out a “hate crime.”He called the Smollett case a “real big scam” — “just like the impeachment of your president is a scam.” The crowd applauded. “Smollett is still trying to get away from it,” Trump said. At the event, Trump signed an executive order establishing a Commission on Law Enforcement and the Administration of Justice. According to the White House, the commission will examine “key policing issues like substance abuse, homelessness, and mental illness,” and would look at “best practices for recruiting, training, and supporting law enforcement officers.” It will be charged with reporting back to the president, with recommendations, within a year, the White House said. Copyright © 2019, ABC Audio. All rights reserved.