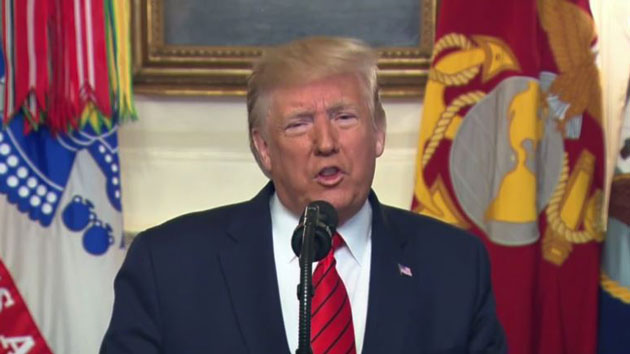 ABC News(WASHINGTON) — President Donald Trump announced the death of Abu Bakr al-Baghdadi, the leader of the Islamic State.He announced his death in an address to the nation from the White House.Al-Baghdadi was last seen alive in a video in April.There had been a $25 million U.S. bounty on the head of al-Baghdadi, who, in his only previous video, recorded in a Mosul mosque in 2014, called himself “Caliph,” or leader of all Muslims.Rumors had swirled since at least 2014 that al-Baghdadi had been wounded, or possibly even killed, but he’d often quash those himself by releasing audio recordings.U.S. special forces nearly killed him in August 2017, destroying a compound south of Ragga in which he was believed to have been during a massive bombardment. The following month, he released an audio recording to prove he’d survived.This is a breaking news story. Please check back for updatesCopyright © 2019, ABC Radio. All rights reserved.