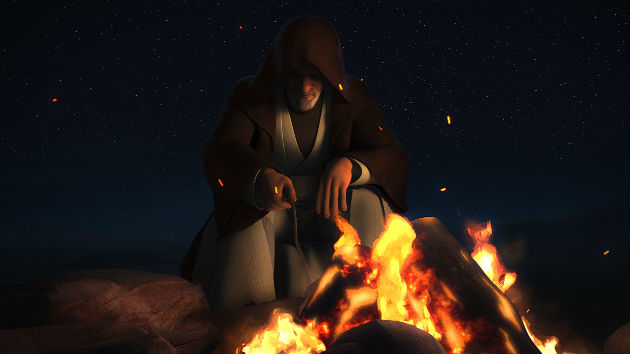 Disney XD(LOS ANGELES) — (NOTE LANGUAGE) For actor Ewan McGregor, the revelation this past summer that he’d be reprising his role as Jedi master Obi-Wan Kenobi in a Disney+ series came as no surprise. He’d already been keeping the secret for years.

So when the news was finally revealed McGregor was able to exhale, he tells Men’s Journal. “It’s a f****** massive relief. Because for four years, I’ve been having to lie to people about it,” he declared.

“The storyline sits between Episode III and Episode IV,” McGregor confirmed to the magazine, adding, “The Jedi Order was falling apart.”

Once meant to be a big screen project, the as-yet untitled Kenobi series will feature a half dozen hour-long episodes.

You may remember that Obi-Wan and Yoda went into hiding after Emperor Palpatine ordered his clone army exterminate the Jedi in Star Wars: Episode III — Revenge of the Sith. Anakin Skywalker’s/Darth Vader’s twin babies Luke and Leia were separated to protect them: Leia was adopted by the royal family of Alderaan, and Luke was delivered to his aunt and uncle on Tatooine, where Kenobi watched over him from afar.

McGregor says, “…[H]is arc will be quite interesting…dealing with that the fact that all the Jedi were slaughtered with the end of Episode III. It’s quite something to get over.”

He adds, “I want to get closer and closer to how Obi-Wan felt while Alec Guinness was playing him. I feel like I’m grayer and nearer him in age, so it’ll be easier to do that.”

The Kenobi series as yet has no release date.  Launching November 12, Disney+ will first premiere The Mandalorian, starring Pedro Pascal as the titular bounty hunter; 2021 will debut a show centering on one of Rogue One’s doomed heroes, Diego Luna’s Cassian Andor.

‘The Wonder Years’ star reacts to Fred Savage’s exit: “There’s no such thing as bad publicity”