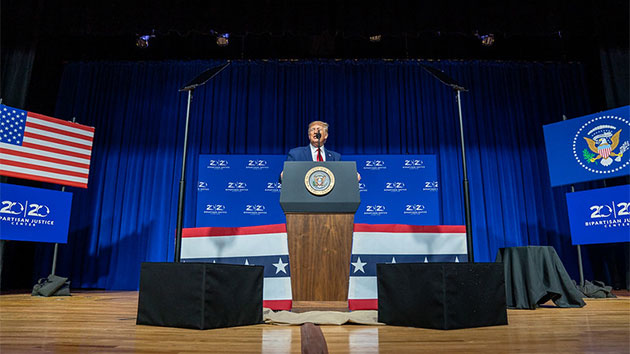 Official White House Photo by Shealah Craighead(COLUMBIA, S.C.) — Sen. Kamala Harris, D-Calif., announced that she would no longer appear at a scheduled event at a historically black college and university on Saturday, after President Trump received an honor from an organization co-hosting the event. Then, Harris, an HBCU graduate herself, announced that she would attend the event because the controversial co-host had been “removed.” The event took place this weekend at Benedict College in South Carolina. The school co-hosted the Second Step Presidential Justice Forum and welcomed the 20/20 Bipartisan Justice Center, which co-hosted the event, and city mayor Stephen Benjamin.Controversy initially ensued after President Trump delivered a keynote speech at the college before accepting an award from the 20/20 Bipartisan Justice Center for his work on criminal justice, on Friday.As friction grew over Trump’s honor, it was announced that the 20/20 Bipartisan Justice group would step aside from the candidate forum. Harris then agreed to appear at the event as planned.In a statement to ABC News, Benjamin said that Benedict College had taken “full operational control” of the candidate forum.”We’ve been trying to work earnestly and in the long-term interests of Benedict College,” Benjamin said.After she agreed to rejoin, she thanked Benjamin in her speech for his leadership and his rebranding of the forum.”Let’s just deal with the elephant in the room which is the events of the last 24-48 hours,” Harris said. “Mayor Benjamin called me and told me that it was shifting and it was going to change … that it was only right and a reflection of this most honorable institution that it would be opened to students, this event, that it would not be a paid event and that everyone would be able to participate,” Harris said. Harris was not only concerned about the award presented to Trump, but she also cited a lack of access for students to attend the event, as a cause for her withdrawal.During Trump’s appearance, the school’s campus was on lockdown as per security protocol, according to Benedict administrative officials.Students were required to remain where they were once the president arrived on campus, and just a small select handful of honor students were permitted inside the forum. Everyone else had to remain in their dorm rooms or watch the forum remotely.”I’m not upset about [Trump] coming on campus, I’m upset about not being able to come and attend the event,” Luis de La Mora, a 19-year-old sophomore at Benedict, told ABC News, adding that he was disappointed that weren’t more accommodations made for the students.”Only the most exclusive kind of people are allowed to go in,” de la Mora said. “For me it feels a little exploitative to say this is such a progressive move, since this is the first time Trump would be visiting an HBCU, at least our little HBCU. It’s supposed to be a shining moment when the world is paying attention to our little institution, but our students don’t really get to do anything about it.”Since the kerfuffle, the school has expanded the forum to more students.In a press conference on Friday, Benjamin told reporters he was concerned about the low amount of students who were able to attend the forum.”I think every time you have the opportunity to expose more young people to public service, to politics, to new ideas, I think we need to avail ourselves to them,” Benjamin said.” I wish more had the opportunity to participate today.”Yet questions remain as to whether the 20/20 Bipartisan Justice Center is still involved with the event.The group’s representatives — and their social media presence — were still promoting involvement with the event, fueling confusion and speculation that the Bipartisan Justice Center had not dropped out completely.According to Mayor Benjamin’s aides, this was “because of contracts, [and] some infrastructure had to stay in place. However … Benedict College is now running the event. The candidate forum portion of event is re-branded, [the Bipartisan Justice Center] is not hosting that. They are still leading a few panels and working to accommodate the folks that bought passes from them.”Members of the Bipartisan Justice Center’s board of directors said that it is still co-hosting the event. However, Benedict College would be taking the lead on the candidate forums, sources told ABC News. This means, the events are open to students and members of the community and that forums will be taking questions at the discretion of the campaigns.Other candidates at the forum weighed on Harris’s changing position.”Kamala is more than a colleague, she’s a sister to me, and I’ll let her speak for herself about her decision she made,” said fellow presidential candidate, Sen. Cory Booker, D-N.J. “[Trump’s] remarks were then offensive. Talking about being the best president ever for black people, which is just not only an offensive lie, because he’s actually doing things to hurt the African American community. So, I just felt that it was very important for me to be here to support a great institution.” Copyright © 2019, ABC Radio. All rights reserved.