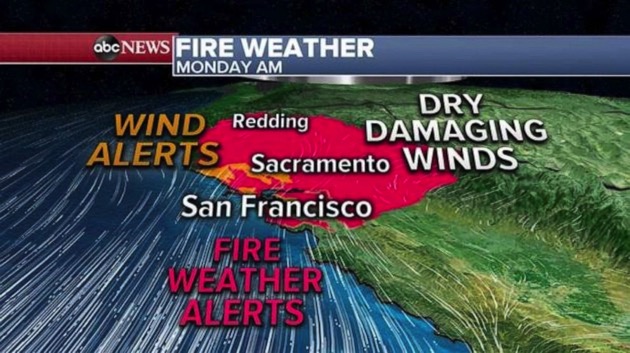 ABC News(NEW YORK) — Due to the extremely dangerous fire conditions in northern California on Sunday, including a 93 mph gust in the hills near Healdsburg in Sonoma County, the Kincade fire rapidly increased to 54,298 acres, doubling in size from Saturday. The containment is now down to 5 percent.There is still fire danger in northern California Monday morning, though it is no longer extremely critical. The good news is that winds will begin to have more of an onshore component later on Monday. Winds will diminish and relative humidity should increase.Fire Weather Alerts should begin to expire midday today in northern California. Unfortunately, critical fire weather conditions will return on Tuesday into Wednesday with gusts locally to 40 mph. It is possible that fire weather alerts will have to be reissued for that time period.Unfortunately, the extremely critical fire danger is shifting to southern California Monday as dry Santa Ana winds will strengthen this morning and last through the day today. Nearly 2 million people in the Los Angeles metropolitan area are in the Extremely Critical Risk area.Winds are already beginning to intensify this morning in southern California with gusts over 50 mph being reported in the Los Angeles County mountains. Relative Humidity overnight went from 100 percent in Newhall to just 17 percent as the winds shifted from offshore to onshore Santa Ana winds.Wind gusts today in southern California could exceed 50 mph in the higher elevations with relative humidity as low as 5 percent. This will cause an existing fire to behave erratically, and any spark could quickly expand into a major blaze.Elsewhere, by Wednesday and Thursday, a cold blast will begin surging down into the Rockies and into parts of the desert southwest. This should cause a fairly strong thermal gradient with the mild air along the Southern California coast line. As a result, dry Santa winds will begin to kick up.A couple of inches of snow have already been reported in the Denver metro area this morning as a storm system organizes in the area. Winter Storm warnings and Winter Weather Advisories have been issued for parts of this region.The morning Commute will be challenging in the Denver metro as snow falls through much of the day Monday. Locally over 4 inches of snow is expected in the metro area, while snow totals in the mountains just west of the city could exceed 1 foot.This storm will move off to the east and begin to accelerate. It is possible it could bring some light snow from Kansas to Wisconsin as it heads towards the great lakes late Monday into Early Tuesday. Minor accumulations are possible.Another Storm will quickly drop in behind this, brining another round of snow to the Rockies and Denver by Wednesday. It is possible this storm will be a little more organized and bring some Halloween snow to parts of the Central U.S. by Thursday.Copyright © 2019, ABC Audio. All rights reserved.