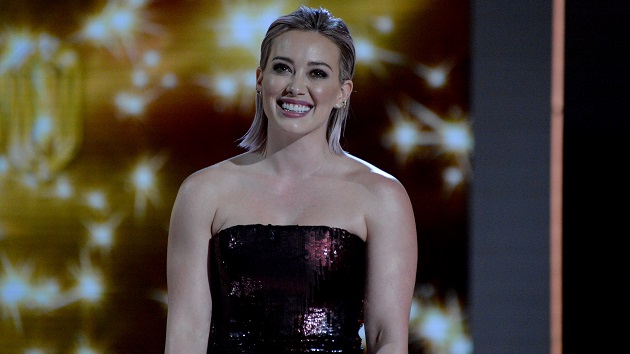 As previously announced, Hilary Duff will reprise her role as Lizzie.

Lizzie McGuire premiered on Disney Channel in 2001, and starred Duff, now 32, as a 13-year-old trying to navigate teenage life with the help of her animated self.

Her animated self will play a role in the new series, where 30-year-old Lizzie works as an apprentice to a New York City-based interior designer.

“We are incredibly excited to bring back one of the most popular Disney Channel series of all time along with some beloved and familiar faces,” said Ricky Strauss, president of content and marketing for Disney+.  “With Terri at the helm and Hilary, Hallie, Robert, and Jake back after all these years, it’s our honor to welcome the McGuire family into the Disney+ family.”

“Just like there is no Lizzie McGuire without Hilary Duff, there is no McGuire family without Hallie, Robert, and Jake,” added Gary Marsh, president and chief creative officer of Disney Channels Worldwide.  “The original series holds a special place in the hearts of so many, and we can’t wait to introduce fans, both old and new, to an older, wiser, yet still perfectly imperfect Lizzie.”

Duff spoke to Good Morning America about being Lizzie again.

“She is everyone’s best friend and there are big hurdles to climb over when you’re 30,” Duff said.  “If she can be there for all the … women that are going through what she’s going through, I am so happy to step into the shoes again.”

Disney+ launches on November 12, 2019.  Disney is the parent company of ABC Audio.

San Francisco 49ers not allowed to play in stadium for 3 weeks under new COVID-19 restrictions
Vanderbilt’s Sarah Fuller becomes the first woman to play in a Power 5 conference football game
Heavy rain ongoing on Gulf Coast as storm aims for Northeast next week
Black Friday 2020: Tips on the best deals to look out for
New storm system to travel across the South this weekend
Michael Jordan donates $2M of proceeds from “The Last Dance” to food banks