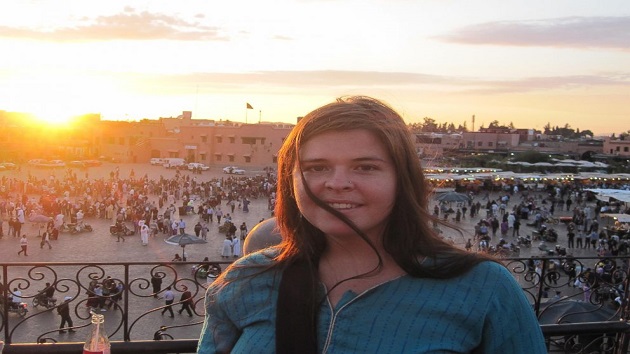 Mueller Family(NEW YORK) — “The View” co-host Meghan McCain took a moment on Monday to honor slain humanitarian worker and ISIS hostage Kayla Mueller during a discussion on the show about the U.S. special operations raid in Syria over the weekend that led to the death of ISIS leader and founder Abu Bakr al-Baghdadi.

Mueller was a Doctors Without Borders volunteer and Arizona native who was kidnapped by ISIS on Aug. 3, 2013, after she crossed into Syrian border for a humanitarian mission. U.S. officials confirmed that she died in February 2015 while in ISIS custody.

President Donald Trump mentioned Mueller during his announcement of al-Baghdadi’s death on Sunday, calling her a “beautiful young woman” who died while trying to “help people.”

“[She] had the opportunity to leave and didn’t, and [therefore] saved other women,” she added. “She’s a very big name, I think, nationally, and in Arizona in particular, and I think today we honor her. We honor her family.”

Mueller’s parents, Marsha and Carl Mueller said in an interview on Sunday that they once traveled to Irbil, Syria, where they met Umm Sayyaf, the wife of ISIS militant Abu Sayyaf, and others who had made contact with their daughter.

“We learned from women that were ransomed out by their governments that…she was held in many cold, dark places. She was raped by al-Baghdadi, we know that to be a fact,” Carl Mueller said. “She was murdered by him or someone in his organization. That’s what we’re pursuing and that’s what we hope that

“I hope he’s burning in hell with Osama bin Laden. I don’t care if that’s un-[politically correct] to say this morning,” McCain said. “I don’t care. It’s our life or the others.”

“I wanted to celebrate yesterday, and there was not this feeling of celebration in the way that we should take these wins because it’s a win for America,” said McCain of al-Baghdadi’s death. “It’s a win for democracy, and it’s a win for freedom and it’s a win for people who don’t believe in torture and raping young women who are just volunteering with Doctors Without Borders overseas.”

“I really think, at this moment, all of our hearts should be with the Mueller family today.”

Convicted murderer, who attorneys say had schizophrenia, put to death in Arizona after SCOTUS denies stay