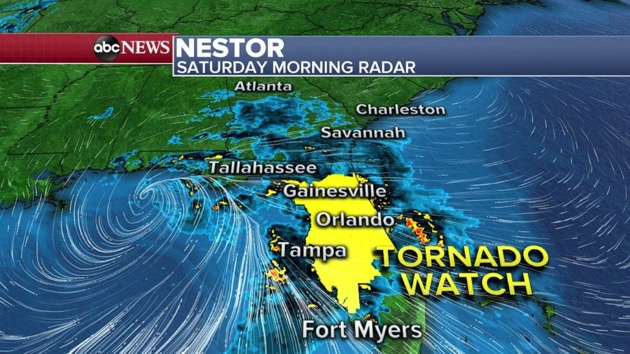 ABC News(NEW YORK) — Post-tropical storm Nestor made landfall in Florida Saturday, and while it continues to lose steam, heavy rain and gusty winds are expected to impact parts of Southeast U.S.Nestor touched down on St. Vincent Island, near Apalachicola, around 2:15 p.m. ET.The storm is no longer a tropical storm and is now considered a post-tropical low-pressure system. However, the storm will continue to race up the Southeast coast Saturday night into Sunday.Much of Florida, Georgia and South Carolina can expect heavy rain and high winds Saturday afternoon.A tornado watch for much of Florida was no longer in effect. There were four reported tornadoes in the Tampa Bay metro area overnight.The Polk County Sheriff’s Office said it had not received any reports of serious injuries related to the tornadoes. However, many residents sustained damage to their homes, some of which were severe, according to the sheriff’s office.The National Weather Service was surveying the damage from the tornadoes in Polk County and Pinellas County Saturday morning.On Sunday, Nestor will slide up the East Coast and bring heavy rain to parts of the Mid-Atlantic, including Virginia, Maryland and Delaware. Once again, there will be at least some marginal severe probabilities in parts of Eastern North Carolina.Nestor will quickly be pushed eastward on Sunday night and Monday, with the majority of the storm heading into the Atlantic. While some showers and gusty winds will be possible, impacts should be kept to a minimum in much of the Northeast.Attention will immediately turn to a new storm developing in the West, that will race across the country this week, bringing rain and mountain snow to the Pacific Northwest. This is typical for fall, as low-pressure systems begin to trek further and further into the mid-latitudes due to colder air gaining strength in the Arctic.The storm is also causing gusty winds ahead of the frontal system, which could briefly cause pockets of fire danger from California to the Rocky Mountains.Late Sunday and early Monday, as the storm heads into the Central U.S., it will spark a line of intense storms and heavy rain. There is a chance for some severe weather across Northern Texas, parts of Oklahoma and Arkansas. The threats will be damaging winds, large hail and possible tornadoes.Then on Monday and into early Tuesday, heavy rain and severe storms will move into parts of the southern U.S., especially the Mississippi River Valley. There will be a potential for a few tornadoes in this round of severe weather. This classic fall severe weather set-up looks like it could be the most notable severe weather in the last couple of months.Copyright © 2019, ABC Audio. All rights reserved.