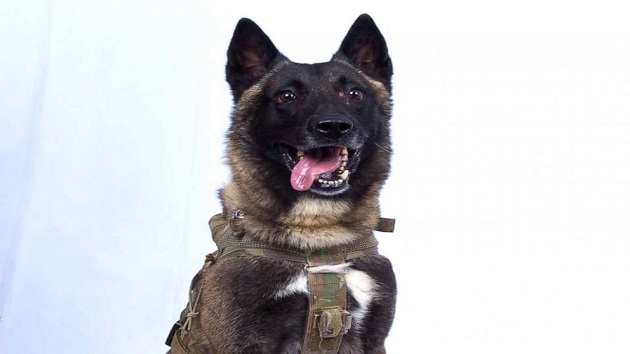 U.S. Military (WASHINGTON) — It played one of the most crucial roles in a top-secret U.S. military operation in Syria on Sunday, racing through an underground tunnel and cornering one of the world’s most sought-after terrorists faster than any human or robot could.

It’s a dog — a Belgian Malinois, to be exact — and although top brass is withholding its name, it’s being hailed as a hero in the operation that ultimately resulted in the Islamic State leader Abu Bakr al-Baghdadi’s death.

President Donald Trump, in a hastily-arranged address to the nation on Sunday, called it “a dog, a beautiful dog, a talented dog,” and — though it sustained injuries of its own — he gave it credit for ensuring that the dozens of operators on the ground completed the two-hour mission unscathed. The president tweeted a declassified photo of the dog on Monday afternoon.

“We had nobody even hurt and that’s why the dog was so great,” Trump said.

According to Trump, the dog was injured when al-Baghdadi detonated a suicide vest, killing himself, three children and causing the dead-end tunnel they occupied to collapse.

Gen. Mark Milley, chairman of the Joint Chiefs of Staff, told reporters at a Pentagon briefing Monday that the dog was “slightly wounded and fully recovering,” and explained that because it was returned to duty as part of a classified military unit, he would not be disclosing its identity.

And then he, too, praised the canine.

“The dog, the canine, the military working dog performed a tremendous service, as they all do in a variety of situations,” Milley said.

Man’s best friends are used in a variety of tactical situations at home and abroad, trained from a young age to complete oftentimes dangerous tasks, including sniffing out contraband and explosives, tracking missing persons and — as was the case Sunday — chasing enemy personnel.

David Petraeus, the former CIA director and retired Army general, told ABC News in 2011 that, “by all measures of performance,” military working dogs outperform “any asset we have in our industry.”

“The capability they [the dogs] bring to the fight cannot be replicated by man or machine,” he said at the time.

We have declassified a picture of the wonderful dog (name not declassified) that did such a GREAT JOB in capturing and killing the Leader of ISIS, Abu Bakr al-Baghdadi! pic.twitter.com/PDMx9nZWvw

The dog used in the al-Baghdadi raid is not the first to have been involved in a high-profile terrorist operation, nor was it the first Belgian Malinois.