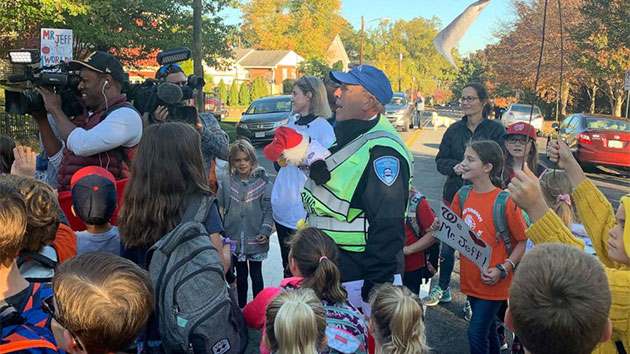 Catherine Ashby(ARLINGTON, Va.) — One beloved crossing guard’s humorous plea to see his favorite baseball team resulted in an outpouring of love from his community and two World Series tickets.Jeff Covel and his family have supported the Washington Nationals and attended games as regulars for almost 15 years.“It’s a huge deal for (The Nationals) to be in the World Series,” Covel told “Good Morning America.”So when the Nationals swept the St. Louis Cardinals, Covel felt ecstatic that his favorite team was finally going to the Fall Classic.Covel said he planned to try to buy tickets of his own – most of which cost an upwards of $1,500.For a week, he jokingly held up a homemade sign at his post saying, “Need World Series tix (1 or 2). For one game only, prefer face value, ‘Bucket List.’ Mr. Jeff Crossing Guard.”Covel, or Mr. Jeff as the children know him at Nottingham Elementary where he’s worked for five years, never expected the generosity that was to come.“This whole group of kids and parents came marching down the street towards my crossing, and I kind of guessed what was up at that point. I started to tear up a little bit,” Covel said.On Wednesday, a group of kids and their families from the elementary school gathered together to surprise Covel at his post with two tickets.After seeing his sign on the way to school, around 60 families of the kids Covel’s taken care of for years got together in a private Facebook group to plan their surprise.In just a week since Covel held his sign, the families raised more than $2,000 and bought Covel two tickets to the World Series.“It was amazing,” Covel said.Covel said the moment was especially meaningful to him because he loves the children from his community.He and his family have lived in Arlington, Virginia, for 47 years, and in addition to having three kids of his own, he referees youth soccer. He said he chose to be a crossing guard in retirement so that he could continue working with children.“I just enjoy working with people,” Covel said.As for his second ticket, Covel had no doubts about who he would take.“(My wife’s) the only one I’d ask to go with me,” Covel said.His wife, Cecilia- “Cele”- Covel said that she is excited to attend the game and that the community’s generosity meant a lot to her too.“I’m very touched that they think enough of (Jeff) to buy these tickets,” she said.The couple is attending Saturday’s game against the Houston Astros at Nationals Park in Washington, D.C.“It’s been a tremendous experience,” Covel said. Copyright © 2019, ABC Radio. All rights reserved.

Drive-thru voting, wait-time technology and more safety measures at the polls this election
Biden to unveil COVID-focused ad during World Series featuring Arizona salon owner: ‘I’m afraid of dying’
The Electoral College: How presidents are elected
Rising infections in Idaho highlight the virus’ latest target: Rural America
Wunmi Mosaku would “run for the hills” if she were actually in her Netflix horror movie ‘His House’
‘The Spanish Princess Part Two’ stars talk representation in the royal court