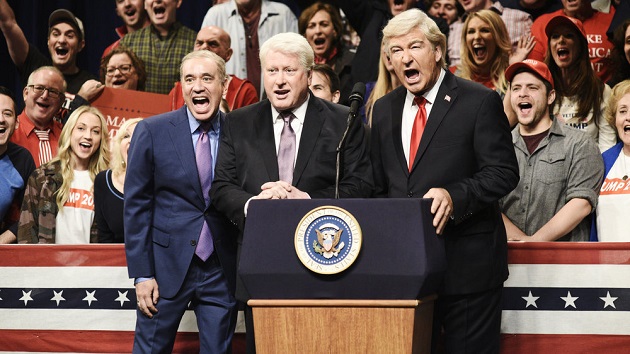 The bit — which also touched on Congress’ ongoing impeachment inquiry, the withdrawal of military troops from Syria, and a border wall being built in Colorado — also marked the return of Darrell Hammond as former President Bill Clinton.

Baldwin’s Trump fired up rally-goers by leading them in a call and response, asking asking his rabid supporters what the impeachment inquiry really is.

“A witch-hunt,” they replied in unison.

“And there was absolutely no…”

Baldwin corrected, “No, no, there’s a new one.”

Cecily Strong played a Trump loyalist, sporting a tee shirt that read, “Keem Amarica Greab Agrain.”  When Trump pointed out the typos, Strong responded, “This was taken verbatim from one of your tweets, therefore it’s correct.”

Aidy Bryant followed, telling Trump, “I love you and I worship you as the one true white lord.”

Pete Davidson, as an ISIS escapee in Syria, thanked Baldwin’s Trump for “bringing jobs back — to ISIS.”

Kate McKinnon and Alex Moffat appeared as Senator Lindsey Graham and Facebook CEO Mark Zuckerberg, respectively, followed by Hammond’s Clinton, who said he just “followed the party.”  After learning of Trump’s impeachment investigation, Clinton assumed it involved a sex-related matter, as with his impeachment in 1998.

Finally, SNL alum Fred Armisen showed up as Turkish President Recep Tayyip Erdogan, who touted his friendship with the president, who had “$100 billion.”

“Not exactly,” said Baldwin as Trump, “but it’s definitely billions.”