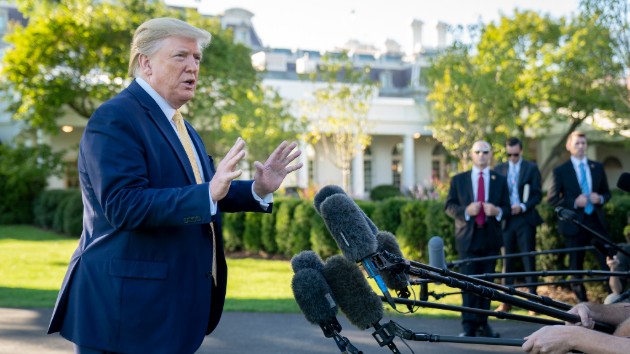 Official White House Photo by Shealah Craighead(WASHINGTON) — The White House plans to tell federal agencies to discontinue subscriptions to the Washington Post and the New York Times, ABC News confirmed Thursday, just days after President Donald Trump said he wanted to “terminate” the subscriptions in another move against the news media. In an Oct. 21 interview on Fox News’ The Sean Hannity Show, Trump said the administration doesn’t “even want it in the White House anymore,” referring to the New York Times.“We’re going to probably terminate that and the Washington Post. They’re fake,” the president said.The Wall Street Journal, which first reported the story, said it’s not immediately clear how the White House would compel agencies to cancel the subscriptions or how soon the move would take effect.The decision would be a “significant cost saving” measure to save taxpayers “hundreds of thousands of dollars,” White House press secretray Stephanie Grisham said Thursday in a statement obtained by ABC News.Currently, both the newspapers offer free digital subscriptions to federal employees with their government email address. The White House has not yet clarified how this new policy will effect digital subscriptions.A White House official declined further comment.Both the Times and the Post have been targets of Trump in the past, especially prominent in the president’s Twitter feed.ABC News reached out to both newspapers. The Washington Post said they had “no comment” and the New York Times did not immediately respond.Copyright © 2019, ABC Audio. All rights reserved.