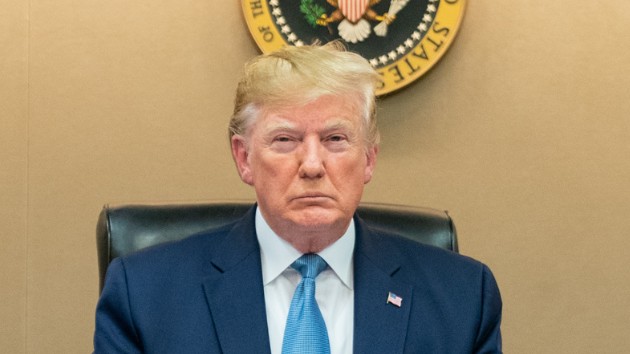 Official White House Photo by Shealah Craighead(WASHINGTON) — President Donald Trump on Monday defended hitting back at former White House chief of staff John Kelly, who said over the weekend that he had warned the president that hiring a “yes man” to replace him would lead to impeachment.Kelly made the comment at a conference in Georgia Saturday, prompting a denial in a written statement from the president.“John Kelly never said that, he never said anything like that,” Trump said in the statement, released by the White House on Saturday. “If he would have said that I would have thrown him out of the office. He just wants to come back into the action like everybody else does.”On Monday, asked by a reporter about why he had “such an aggressive response to John Kelly’s comments over the weekend,” the president defended his statement.“Oh, I don’t think it’s aggressive at all,” Trump said at Joint Base Andrews, in Maryland, en route to a speech in Chicago. “I would be surprised if he made those comments in a negative way. But I don’t think the response would be — if he actually said that, if he actually meant that, I said what I’d do, and that, I mean.”Kelly’s recounting of what he said he told Trump took place at a political conference in Georgia sponsored by the Washington Examiner.“I said, whatever you do — and we were still in the process of trying to find someone to take my place — I said whatever you do, don’t hire a ‘yes man,’ someone who won’t tell you the truth — don’t do that,” Kelly said. “Because if you do, I believe you will be impeached.”Kelly also said that he had “second thoughts” about leaving the White House.“That was almost 11 months ago, and I have an awful lot of, to say the least, second thoughts about leaving,” he said. “It pains me to see what’s going on because I believe if I was still there or someone like me was there, he would not be kind of, all over the place.”On Saturday, White House press secretary Stephanie Grisham lashed out at Kelly.“I worked with John Kelly, and he was totally unequipped to handle the genius of our great President,” Grisham said in a written statement.Copyright © 2019, ABC Audio. All rights reserved.

‘Yes, I’m nervous’: Mayor urges calm as outrage grows over police shooting of unarmed Black couple in Illinois
What’s the scariest movie of all time? Better check your heart rate
‘News of the World’ trailer shows Tom Hanks on an epic adventure
Women diagnosed with breast cancer amid COVID-19 stress importance of mammograms
Plexiglass partitions to separate Trump, Biden as they face off in final 2020 debate
How will Biden deal with Trump’s personal attacks at Thursday’s debate?