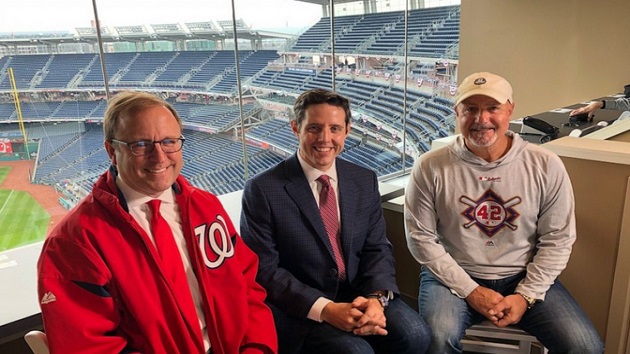 ABC(WASHINGTON) — On the eve of the third game of the Fall Classic, the Washington National’s general manager and president of baseball operations Mike Rizzo sat down with ABC News’ “Powerhouse Politics” hosts after securing two World Series wins in Houston.Washington hasn’t seen a World Series for nearly 90 years — since 1933. When asked about what it means to have the Nats break through in a city where politics is its own sport, Rizzo weighed how the politics and power of the nation’s capital have elevated the significance of this series.”It’s an incredible story — we had a 0.1% chance of winning the National League pennant,” Rizzo told ABC News’ Political Director Rick Klein and Chief White House Correspondent Jonathon Karl. “The prognosticators didn’t factor in or analyze the heart of this club.” After having the third-worst record in Major League Baseball in May, the Nationals stunned the baseball world by surging back to secure a wild card spot against the Milwaukee Brewers.”We can’t undersell what this means for the D.C. area. I think the D.C. atmosphere is something special to these players,” he said. “The atmosphere of the city is palatable. They feel it, they sense it and they love it.”Two of the most recognizable names on the Nationals roster are veteran first baseman Ryan Zimmerman and 21-year-old outfielder Juan Soto.Rizzo said Zimmerman, the team’s first draft choice after moving from Montreal to Washington in 2005, brings a calmness to the team that allows him to thrive in the biggest moments.”He excels between the lines and in the dugout, in the clubhouse and in the community. He’s a Washingtonian through and through,” he said. “He’s up there with the greats.”Karl noted to Rizzo that Soto may be the greatest player at the age of 20 he’s ever seen.Rizzo agreed, adding that Soto and Zimmerman are exactly the type of franchise cornerstones every successful team must have.”We’re looking under every rock to find a Juan Soto,” he added.During most games, Rizzo sits in the first few rows with the team’s analytics and operations personnel to discuss the game, but this is the World Series, he said.”Tonight’s game is a little different. We’re going to be fans like everybody else,” Rizzo said Friday. “There’s little we can do to affect the outcome of the game. … I asked them to just let their hair down and enjoy the game.”The winning streak was broken for the Nationals Friday night, however, with the Astros taking home a 4-0 win.The World Series picks back up Saturday night in Washington. Copyright © 2019, ABC Audio. All rights reserved.