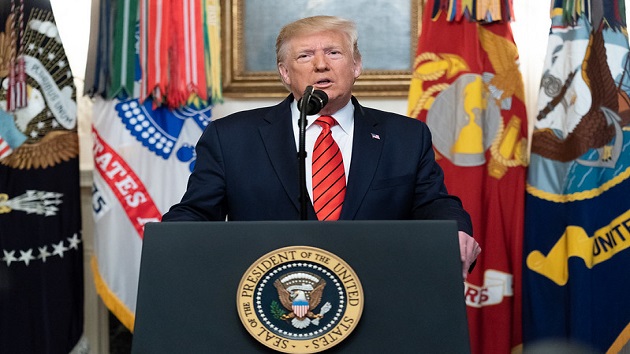 Official White House Photo by Shealah Craighead(WASHINGTON) — The remains of ISIS leader and founder Abu Bakr al-Baghdadi were disposed at sea after he died during the U.S. military raid that targeted his compound in northwest Syria over the weekend, federal a U.S. official confirmed Monday.

U.S. officials would not reveal details about which U.S. Navy ship was used for the burial or in which body of water it took place, but they told ABC News that the procedure was similar to the one used to dispose the remains of al-Qaeda founder Osama bin Laden.

In Islam, people are typically buried in the ground, without a casket, before the next of five daily prayer periods have taken place. But with al-Baghdadi, the U.S. government apparently decided it was risky to have a known grave, lest it become a shrine to the world’s best-known terrorist.

In 2011, Bin Laden’s body was taken to the U.S.S. Carl Vinson, a U.S. aircraft carrier in the North Arabian Sea, according to officials. His body was washed and wrapped as prescribed by Islamic law. A military officer read religious remarks that were translated by a native Arabic speaker before bin Laden’s remains were sent into the deep.

On Monday, Chairman of the Joint Chiefs of Staff Mark Milley declined to say whether al-Baghdadi’s body had been buried at sea during a press conference earlier on Monday. He would only say that the “disposal of his remains” is “complete and was handled appropriately” following additional DNA identification that took place at a secure facility.

U.S. special operations forces targeted al-Baghdadi in a secret nighttime raid in Syria on Saturday. The troops eventually cornered him and three young children that he had taken captive. Realizing that there was no way out, he detonated a suicide bomb inside of a dead-end tunnel, killing himself and the three children.

“Abu Bakr al-baghdadi is dead. He was the founder and leader of ISIS, the most ruthless and violent terror organization anywhere in the world,” the president said. “The United States has been searching for Baghdadi for many years. Capturing or killing Baghdadi has been the top National Security priority of my administration.”

No large events to be held at Buckingham Palace this year
Nutritionist shares foods and recipes for Breast Cancer Awareness Month
Changing how you inhale and exhale could help reduce coronavirus anxiety
Why recognizing the signs of breast cancer should still be a priority amid COVID-19
Gusty winds and record heat forecast for Northern and Southern California
Airline strapped for cash offers chef-made meals at home, workshops and more