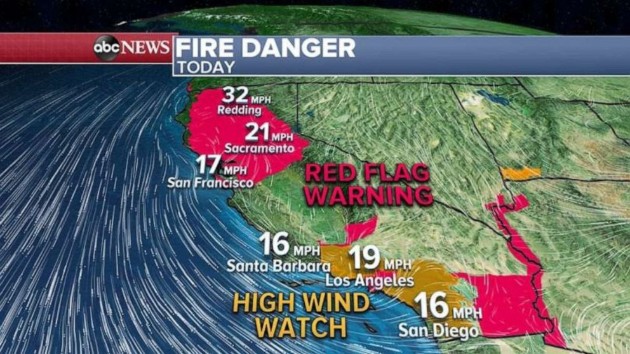 ABC News(NEW YORK) — More arctic air pouring into the heartland of the country will push gusty, dry offshore winds into California starting Tuesday in the north and Wednesday for the south. This could be the biggest Santa Ana wind event for southern California so far this year.The Kincade Fire in Sonoma County, northern California, is now 74,000 acres and is 15% contained. The Getty fire in Los Angeles County, in southern Cali, is now 600 acres and is 5% contained. Lighter winds overnight, however, helped firefighters across the state to battle the ongoing fires, but this will not last long. On Tuesday, winds will increase in northern California and will gust to over 50 mph. Because of this, numerous Fire and Wind alerts have been issued for California already. A High Wind Watch has already been issued for southern California for Tuesday night into Thursday.The Biggest Santa Ana wind event of the year is expected on Wednesday and Thursday in southern California. Some wind gusts in the mountains could reach near 80 mph Wednesday morning.Ten states Tuesday morning are currently under winter weather alerts for the bitter cold and snow moving in. Already more than a half a foot of snow fell in parts of the northern Rockies and now this storm is moving south and east into Denver and then into the Plains and the Great Lakes.Locally 6 to 12 inches of snow is expected in Denver Tuesday and then this storm will move into the Plains and the Great Lakes bringing as much as 5” of snow. Chicago could see its first snow of the season.Behind the snowstorm, there is bitter cold for Halloween morning and some areas could have the coldest Halloween morning ever recorded. Copyright © 2019, ABC Audio. All rights reserved.