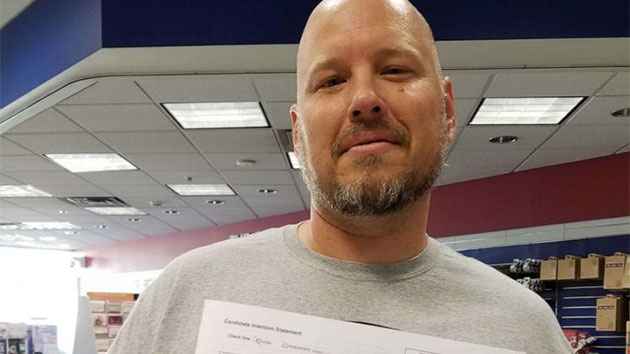 Adriel Hampton/Twitter(WASHINGTON) — When Facebook took down Adriel Hampton’s fake political ads, he came up with a novel way to skirt the problem: become a politician himself.Hampton, who is 41 and runs a marketing firm in San Francisco, officially threw his hat in the race for California’s 2022 gubernatorial election on Monday. The whole point of his campaign, he said, is to expose the problems with Facebook’s policy not to fact check ads placed by politicians.”It’s very, very dangerous to put out political misinformation, but, right now, Facebook said it’s open season,” Hampton told ABC News.Facebook did not immediately respond to a request for comment from ABC News. But last week, the tech giant’s CEO, Mark Zuckerberg, appeared before Congress and faced questions about its ad policy.In particular, Zuckerberg was grilled by Rep. Alexandria Ocasio-Cortez, D-N.Y, over how Facebook would handle the spread of false information across the site. When Ocasio-Cortez asked if she could target Republicans and falsely claim that they supported the Green New Deal — one of her signature ideas — Zuckerberg said he didn’t know the answer to that “off the top of my head.” Afterward, Hampton followed through with Ocasio-Cortez’s hypothetical scenario and created a parody ad that featured Sen. Lindsey Graham, R-S.C, voicing his support for the Green New Deal — something the conservative senator has never done.The ad was taken down.Now that Hampton is a candidate in the California governor’s race, he is working on new fake ads, which he expects Facebook will allow to stay up.He plans to especially target vulnerable Republicans and run ads in their district saying that they are considering voting to impeach President Donald Trump.”That’s how you would actually influence elections,” Hampton told ABC News. Copyright © 2019, ABC Audio. All rights reserved.