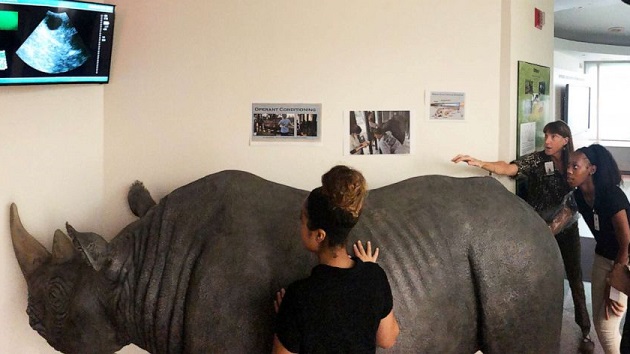 Cincinnati Zoo & Botanical Garden(CINCINNATI) — Not only can you see the rhinoceros at the Cincinnati Zoo, but now visitors can listen to the heartbeat of a baby rhino in a new exhibit experience.The exhibit features Charlotte, a life-sized, pregnant black rhinoceros replica that stands in the lobby of the Lindner Center for Conservation and Research of Endangered Wildlife (CREW) at the zoo.Zoo visitors learn about the endangered species and efforts to preserve them, including the latest reproductive technology. That’s where they put their learning to practice by participating in a rectal ultrasound to find the heartbeat of Charlotte’s baby rhino fetus.Briasia and Diarra are two 11th graders taking part in the Zoo Academy, a program for high school juniors and seniors interested in biology, animal care and conservation. The students spend time working with animals and zookeepers. Both young women aspire to become veterinarians and were some of the first to have the chance to work with Charlotte.

“I was taken aback. It scared me. I really thought it was a real rhino!,” Briasia said upon her initial experience with Charlotte.

Diarra said: “They did an amazing job. Just touching it is … just wow!”By assisting natural breeding and through the use of artificial insemination, CREW has had success in birthing rhino calves and even brought rhinos back to their native land to contribute to the population.Ultrasound is the best way to assess [rhinoceros] fertility according to scientist Terri Roth, director of CREW. She’s credited with figuring out how to successfully breed Sumatran rhinos. Her research led to the births of three calves at the Cincinnati Zoo. There are fewer than 80 in the world.“Using serial ultrasound exams you can determine if the rhino is exhibiting normal reproductive activity (developing follicles on the ovary and ovulating regularly) and identify uterine pathology (cysts and tumors) which is not uncommon and can lead to infertility,” said Roth.In addition to detecting early pregnancy in rhinos, Charlotte is a way for students and zoo visitors to see firsthand how ultrasound technology is used to study reproduction and benefit the animals.Briasia described how the zookeepers can do invasive ultrasounds without using sedation, “basically by using a lot of food to train the rhino and teach her ‘it’s ok, we are helping you’ — it’s a good thing.”Diarra recounted hearing the heartbeat.

“It was so calming and nice to hear. Like, wow, I really found this baby. She’s pregnant,” she said.The zoo made national headlines in 2017 by documenting the birth of a 6-month premature hippo named Fiona. Her survival became an international phenomenon and every successful milestone provided an opportunity to educate people about conservation and endangerment.The Black rhinoceros is a species native to Africa that grows 5 to 6 feet tall and weighs up to 3,000 pounds. According to the International Union for Conservation of Nature Red List of Threatened species, the species is critically endangered, and at extremely high risk of extinction in the wild. These animals have been poached for their prominent horns, which are prized for ornamental decoration and used in Eastern medicine. Copyright © 2019, ABC Audio. All rights reserved.