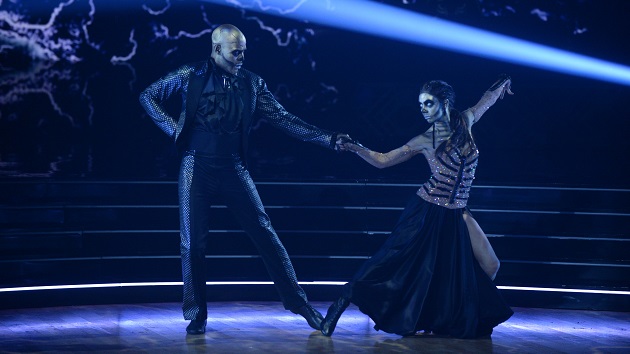 ABC/Eric McCandless(NEW YORK) — Spooks and scares were plentiful on Monday night’s Dancing with the Stars’ special Halloween celebration.  With eight couples competing for the Mirror Ball Trophy, there was little room for error as the judges picked apart every falter on the dance floor.  With all the dancers fighting to stay alive in the competition, each team brought their best and the night ended with a four-way tie for first — along with another shocking elimination.

Despite a stupendous comeback, Queer Eye star Karamo was begrudgingly sent home after falling into the bottom two along with The Office’s Kate Flannery.  Just like last week, the judges loudly griped about the audience’s voting and struggled to decide who was more deserving of staying in the competition.

Judges Carrie Ann Inaba and Bruno Tonioli were completely divided on who to eliminate, which ultimately relinquished the final decision to Len Goodman.  “Neither couple deserves to be in this position,” the judge groused. “However, it is what it is and I got to save Kate.”

Although Karamo was disappointed to go home, he did have the consolation prize of being able to dance to not one, but two Beyonce songs that night — his absolute icon.  He danced a Paso Doble with partner Jenna Johnson to “Survivor” and later, as part of Team Treat in the group competition, performed an intricate routine to “Sweet Dreams.”

Kel opened the show with an electric jive to Rocky Horror’s “Time Warp,” which set the tone for the night: that it would be full of fun, surprises, and spooky treats. The judges raved about Kel’s ability to own the dance floor and handed him straight nines for a total of 27/30.

The stand up comedian’s snake-inspired Halloween costume was also the first of many intricate outfits to wow the audience and judges.

Van Der Beek, dressed as a sinister demon, performed a hypnotizing and fluid Viennese waltz to “I Put a Spell on You.”  He and Emma turned their routine into a twisted love story about a demon tempting an innocent girl away from her lover, which drew intense praise from the judges.  Despite slipping on some fog, Van Der Beek also collected straight nines for a 27/30 total.

Another first place finisher also took a slight tumble on the ballroom floor.  Lauren, as a sexy vampire, mesmerized  the audience — and the judges — with her striking Argentine tango to “Whatever Lola Wants.”  The country singer slipped while going into a turn, but her recovery sealed her first place finish.  Carrie Ann praised Lauren’s quick thinking and trust in her partner to guide her back onto her feet and make it look like it was part of their routine.  The judges awarded her 27/30.

Brooke, who was nearly sent home last week, turned her tears into triumph with her creepy Harley Quinn-inspired tango to Ava Max’s “Sweet but Psycho.”  Her twitchy head tilts, unsettling expressions, along with her sharp moves delighted the judges who happily handed her straight nines — and yet another 27/30.

Unlike Brooke, former White House Press Secretary Sean Spicer failed to buck last week’s trend and did not impress the judges with his jive to “Monster Mash.”  He earned the lowest score of the night despite collecting praise for his Frankenstein makeup as being one of the best looks of the night — to which the former official said it took four hours to complete.

However, with contestants being scored on their dancing, Judge Len said Spicer’s performance “lacked jive content” and lamented “Halloween is about the supernatural and that wasn’t super and it wasn’t really natural, either” as the audience protested with a chorus of boos.  Despite earning a 18 out of 30, he dodged falling into the bottom two once more.

The Halloween spectacular also treated fans to something new: the contestants were split into two teams and competed against one another in a spooky group dance.  Before the shocking elimination of Karamo, the audience was dazzled by two group performances by Team Trick and Team Treat.

Representing Team Trick was James, Hannah, Ally, and Lauren, who performed an intricate and eclectic dance to “Somebody’s Watching Me” — which borrowed elements from the Paso Doble, tango, jazz, and waltz.  Their impressive routine also earned straight nines from the judges, the fifth of the night, for a solid winning score of 27/30.

Team Treat, comprised of Karamo, Kate, Kel, and Sean, also impressed with their story-driven performance to Beyonce’s “Sweet Dreams,” where the women — dressed as creepy clowns — tormented the men as they tried to sleep.  While the routine was entertaining, the judges pointed out that not everyone was on time and awarded their efforts with a 24/30.

Dancing with the Stars returns next Monday, November 4 at 8 p.m. ET on ABC, where the night’s scores will carry on over to next week.