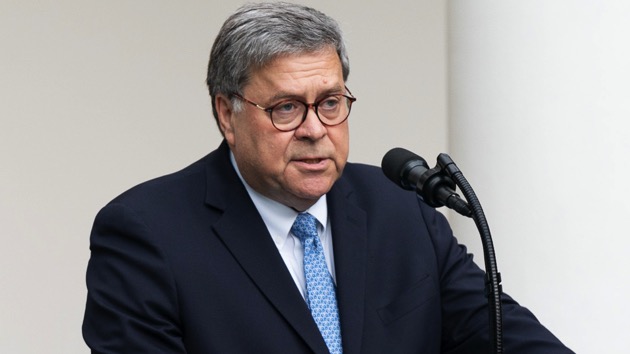 Official White House Photo by Shealah Craighead(WASHINGTON) — Courtney Wild, who has accused sex offender Jeffrey Epstein of childhood abuse, is not giving up her fight for justice, even after Epstein’s death by apparent suicide in August.Wild, whose lawsuit against the U.S. Department of Justice helped uncover Epstein’s once-secret non-prosecution agreement, sent a letter to U.S. Attorney General William Barr on Monday urging him to support her efforts to invalidate the deal, which also extended immunity in Florida to others who may have assisted Epstein or participated in his alleged crimes against children.“I have been fighting for over ten years to get rid of the provisions in the non-prosecution agreement that gave immunity to Jeffery Epstein and his co-conspirators in Florida for the sexual crimes committed against me when I was a child,” Wild wrote in her letter to Barr. “I write to ask for your help.”Wild was a 14-year old girl from a troubled home when she says she was recruited by a friend to go to Epstein’s Palm Beach Island mansion under the guise of giving an older man a massage. She was ultimately among more than 30 underage girls identified as victims of Epstein during a wide-ranging investigation by the FBI and the U.S. Attorney’s Office in Miami.In 2008, under the pseudonym “Jane Doe 1,” Wild sued the Justice Department in an effort to vindicate her rights as a crime victim. She alleged that the Epstein agreement was illegal because prosecutors failed to confer with her and the dozens of other alleged victims in advance of striking the deal, as required under the federal Crime Victims’ Rights Act.“I have been re-victimized, at every stage, by the same government that’s supposed to protect me,” Wild, 31, wrote in the letter to Barr.Epstein served just 13 months in a private wing of a Palm Beach County Jail and was granted liberal work releases privileges that allowed him to spend up to 16 hours a day at his office.Even after Epstein served his sentence and moved his primary residence to a private island in the U.S. Virgin Islands, Wild continued to press her case against the federal government over Epstein’s indulgent deal.After 11 years of highly-contested litigation, which exposed the details of secret negotiations between prosecutors and Epstein’s high-powered defense team, a federal judge ruled in February that the deal with Epstein was reached in violation of the rights of Wild and the other alleged victims.But before the court could take the next step to decide whether to toss out the agreement, federal prosecutors in the Southern District of New York, on July 6, arrested Epstein for an alleged sex trafficking conspiracy. The new charges led to fresh scrutiny of Epstein’s prior lenient treatment and to the resignation of the U.S. Secretary of Labor, R. Alexander Acosta, who presided over the non-prosecution agreement as the top federal prosecutor in Miami.It also gave hope to Wild that justice might finally be near for her and other girls and young women allegedly abused by Epstein. She traveled to New York for Epstein’s detention hearing and urged a judge to keep Epstein locked up until his trial.Less than a month later, Epstein was dead from an apparent suicide in his federal prison cell.“Unfortunately, when Jeffrey Epstein died, the judge threw my case out,” Wild wrote in her letter to Barr. “This doesn’t make sense to me because the co-conspirators who received immunity through the illegal deal are still alive, as is the government who I sued for violating my rights in the first place. How is it fair that the government and Epstein’s co-conspirators essentially get immunity by way of the government allowing Epstein to die in its custody?”Wild is now appealing the court order that closed her case and is urging Barr to step in to review the department’s position opposing invalidation of the deal.“She is not about to quit because of one bad ruling,” said Wild’s attorney, Brad Edwards. “The dismissal of Courtney’s case was shocking to her. And who can argue with her logic? The government should not escape from one mistake by committing another.”Following Epstein’s death, Barr publicly vowed to continue pursuing the investigation into others who may have assisted Epstein.“Any co-conspirators should not rest easy,” Barr said in an August speech. “The victims deserve justice, and they will get it.”Yet Edwards argues that the ongoing investigation in New York shouldn’t mean “that those who assisted in the abuse of Courtney and many others in Florida should benefit from an illegal deal,” Edwards said. “All she wants is for the government to work with her and not continue to fight against her.”Wild’s letter notes that Epstein’s well-connected attorneys were able to plead their case all the way up to senior Justice Department officials in 2008, and she asks that Barr, the nation’s top law enforcement official, afford her and other alleged Epstein victims the same opportunity.“I don’t understand why the man that abused me gets to have his issues reviewed by the top people in the Justice Department,” Wild writes. “But the victims do not have that same right?”Copyright © 2019, ABC Audio. All rights reserved.