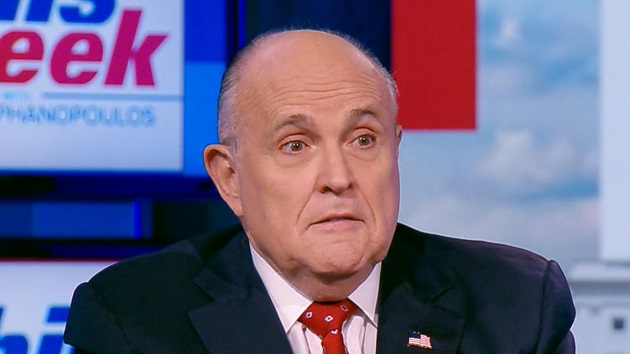 ABC News(WASHINGTON) — President Donald Trump’s first Homeland Security adviser Tom Bossert recently told ABC News’ “The Investigation” podcast that Trump’s lawyer, Rudy Giuliani, is in a “position of giving the president bad advice.” Bossert said that the “broken” trust between Trump and career government officials could impact the president’s ability to govern.”That trust has been broken in a lot of ways. People on the career side of our government have leaked information that put the president in [an] understandably paranoid posture,” Bossert said. “The President has, in return, made decisions without counseling their advice or in some cases made that decision and announced it without running through those channels that would normally announce those decisions and coordinate their implementation. And as a result, I’m afraid we’ve reached a point where that distrust is going to start to affect our ability and the president’s ability to govern.”That lack of trust has prompted Trump to break from traditional government processes, Bossert said, citing the president’s announcement on Twitter that American troops would be withdrawing from Syria.”I suspect that part of why he made that decision and announced it so atypically was this trust issue,” Bossert said. “If he doesn’t trust the institutions and the people around him to keep his decisions, to make sure that they don’t try to talk him out of his decisions, to not leak those decisions in an untimely way, then he’s going to continue to announce his decisions via Twitter or some other means of direct…announcement.”Bossert was a staffer for the House Judiciary Committee during former President Bill Clinton’s impeachment and was tasked with drafting the subpoenas that House Republicans sent to the White House. He spoke to “The Investigation” about former Deputy National Security Adviser Charles Kupperman, who did not comply with a subpoena to testify for the impeachment inquiry on Monday.Kupperman, who worked under former National Security Adviser John Bolton, did not show up to testify after asking a federal judge late Friday to decide on whether he should comply with the subpoena or the White House’s directive not to appear.Bossert described Kupperman as a “respected, thoughtful mind in the national security community” and said that he is “being torn” between the legislative and executive branches’ requests.”The root of the problem is when you have a legislative branch request and an executive branch request,” Bossert said, “the two of them have coequal status under our system of government and they’ve reached an impasse.”Bossert told ABC News in September that he was “deeply disturbed” and “frustrated” with the “entire mess” that began with Trump’s July phone call to Ukrainian President Volodymyr Zelenskiy and led to calls for an impeachment inquiry. Bossert criticized Trump’s legal team during that interview for telling the president about a “conspiracy theory” involving the Democratic National Committee server and Ukraine.

“It’s not only a conspiracy theory, it is completely debunked,” said Bossert. “It has no validity.””What I said was a very tailored and directed assault on the notion that perhaps…the intelligence community’s assessment that the DNC was hacked by Russia was inaccurate,” Bossert told “The Investigation” while discussing his past comments. “For anyone to suggest otherwise…puts them in a position of giving the president bad advice.”Bossert, who currently serves as an ABC News contributor, also spoke about the testimony last week by the top U.S. diplomat in Ukraine, Bill Taylor.Taylor recounted in his testimony last week a series of events that led to his concerns that was leveraging military aid to Ukraine and a White House meeting as a way to get the Eastern European country to open investigations into Burisma, an oil company for which former Vice President Joe Biden’s son, Hunter Biden, held a seat on the board of directors, as well as election interference in 2016.”By mid-July, it was becoming clear to me that the meeting President Zelenskiy wanted was conditioned on the investigations of Burisma and alleged Ukrainian interference in the 2016 U.S. elections,” Taylor testified.Bossert said that “it’s pretty clear and powerful in his view that there were two processes afoot.””I think the president — every president — is entitled to kind of the informal ‘kitchen cabinet’ of advice that he receives from people that don’t formally serve him. The problem here now is, of course, whether it went further in two directions,” Bossert said. “If Mayor Giuliani was advising the president as his lawyer or as his friend, there’s nothing wrong with that at all. And by the way, it doesn’t mean his advice is wrong or bad. But if he’s then going back and carrying messages in the other direction, it’s not entirely illegal, but it’s just not good to a coordinated delivery of U.S. government policy and messaging. If you have a secretary of state delivering messages on one hand and an informal adviser delivering messages on the other, if they’re not coordinated, you run into problems. And I think that’s the thrust of what Taylor testified to.” Copyright © 2019, ABC Audio. All rights reserved.