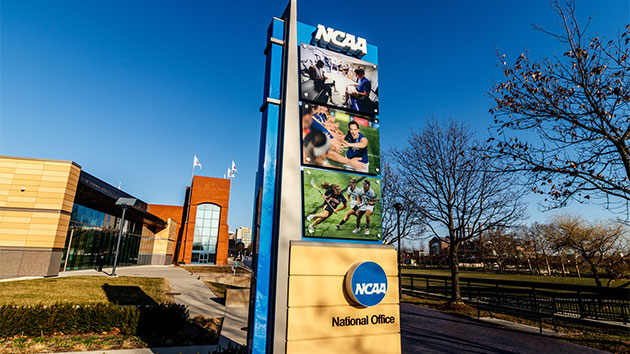 jetcityimage/iStock(NEW YORK) — The NCAA Board of Governors broke with the long-held tradition of forbidding student-athletes from earning income on Tuesday by voting unanimously to allow them to profit from their names, images and likenesses.The board, which framed the historic vote as part of its continuing effort to “support college athletes, also said it would direct each of the NCAA’s three divisions to “immediately consider updates to relevant bylaws and policies for the 21st Century,” Michael Drake, chairman of the board and president of Ohio State University, said in a statement.”We embrace change to provide the best possible experience for college athletes,” Drake added. “Additional flexibility in this area can and must continue to support college sports as part of higher education.”The board’s vote came after California Gov. Gavin Newsom signed into law in September a measure allowing college athletes in his state to profit from their names, images and likenesses.Illinois lawmakers also were considering similar legislation.

Colleges reap billions from student athletes but block them from earning a single dollar. That’s a bankrupt model.I just signed the Fair Play to Pay Act with @KingJames — making CA the first state to allow student athletes to profit off their name, image, and likeness. pic.twitter.com/aWE9OL9r1v

“This modernization for the future is a natural extension of the numerous steps NCAA members have taken in recent years to improve support for student-athletes, including the full cost of attendance and guaranteed scholarships,” Drake said.The board’s action Tuesday was based on “comprehensive recommendations” from the NCAA Board of Governors Federal and State Legislation Working Group, which is composed of university presidents, commissioners, athletic directors, administrators and student-athletes.The board emphasized that college athletes can profit from their image and likeness “in a manner consistent with the collegiate model.”NCAA President Mark Emmert said the board’s decision will “ensure fairness and a level playing field” for student-athletes.”The board’s action today creates a path to enhance opportunities for student-athletes while ensuring they compete against students and not professionals,” Emmert said in a statement.Earlier this year in a letter to the California State Assembly, Emmert had warned of severe consequences for the state’s colleges and universities for passing such legislation, threatening to prohibit athletic teams from participating in NCAA championships.But the California Assembly went on to overwhelmingly passed the legislation, a move that was praised by NBA star LeBron James.

Everyone is California- call your politicians and tell them to support SB 206! This law is a GAME CHANGER. College athletes can responsibly get paid for what they do and the billions they create.

“Colleges reap billions from student-athletes but block them from earning a single dollar. That’s a bankrupt model,” Newsom tweeted on the day he announced he had signed the legislation.Copyright © 2019, ABC Audio. All rights reserved.