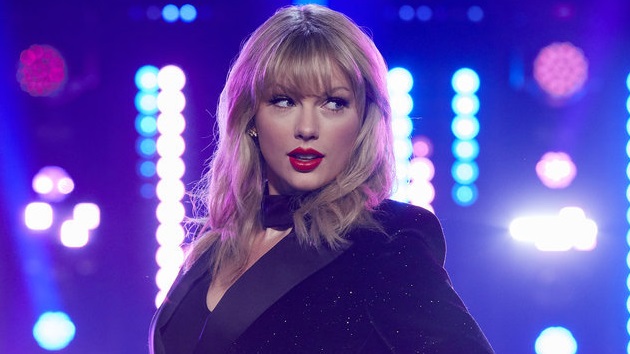 Trae Patton/NBC(NEW YORK) — On Monday’s episode of The Voice, the battle rounds came to a close and the knockout rounds began, with “mega” mentor Taylor Swift.

First up, Blake Shelton, Kelly Clarkson, John Legend and Gwen Stefani’s teams faced off against one another one last time to earn a spot in the knockout rounds.  Each coach enlisted the help of a guest adviser during rehearsals: Darius Rucker for Team Blake; Normani for Team Kelly; Usher for Team Legend; and will.i.am for Team Gwen.

Rockers, Caroline Reilly, 15, and Jake HaldenVang, 24, representing Team Gwen, went head-to head on Pink’s “Just Like a Pill.”  Gwen advised guitar-toting Jake to ditch his ax for the performance, and recommended that each artist go home and videotape themselves, watch it back and take whatever made them “cringe” out of their individual performances. Kelly praised Caroline’s “passion,” but conceded there was no one else in the competition like Jake.  Blake enjoyed both performances, but couldn’t deny Reilly’s promising talent for her age.  Gwen wanted a young female singer for her team, but ultimately had to pick Jake. Caroline was sent home.

Team Legend’s 15-year-old crooner Preston C. Howell faced off against the much older folk singer Mandeleyev, 28, on James Taylor’s “Fire and Rain.” John explained that the song was a great place for the duo to “meet in the middle.”  Legend said the outcome of the competition came down to who would have the most success in the later rounds.  Following the battle, Gwen leaned towards Preston for the tone of his voice, and Blake agreed. Kelly also praised Howell, but gave the edge to Mandeleyev.  Legend declared Preston the winner, explaining that there were so many directions he could go with the teen.  Mandeleyev was sent packing.

Team Kelly’s Hello Sunday — 13-year-old Chelsea and 14-year-old Myla, the youngest duo in Voice history — battled Lauren Hall, 25, on “Wrecking Ball,” by Miley Cyrus.  Kelly’s adviser, Normani, addressed the camera during rehearsal and said Lauren was the more polished vocalist.  But what Hello Sunday lacked in skill, they made up for with their ability to “create a moment” with the combination of their voices.  After the performance, John called it a tossup; but Gwen gave Lauren the edge. Kelly said both acts would be “a dream to work with,” but chose Hello Sunday.

Lauren’s time on the voice isn’t over though, thanks to a last-minute steal by Blake.  She’ll now represent Team Blake in the knockouts.

First up in the knockouts, were Team Blake’s Marina Chello, singing Tom Jones’ “I Who Have Nothing,” going up against Cali Wilson, tackling Chris Isaak’s “Wicked Game.”  “Mega” mentor Taylor Swift suggested Marina act out the song as well as sing it. Cali, she said, needed to let the emotions of the song be expressed in her face.  None of the other judges offered an opinion as to the winner, but Blake had to pick one, and chose Cali.  She advances to the next round, while Marina’s time on The Voice is over.

Next up, representing Team Kelly, was country singer Jake Hoot, covering Jason Isbell’s “Cover Me Up,” facing off against Melinda Rodriguez, performing “Always be My Baby,” by Mariah Carey.  Rodriguez dedicated it to her brother — a huge Swift fan — who was undergoing a heart transplant at that very moment.  Swift’s advice for Jake was to avoid swaying back and forth as he sang.  Taylor, noting her biggest contribution to music has been the hooks she writes, used that talent to help Melinda take the song up a notch. The coaches congratulated both artists for delivering their best performances yet, but leaned towards Jake. Kelly agreed and declared him the winner.  He moved on, as Melinda headed home.

The final knockout of the night went to Team Legend’s Max Boyle, tackling Billie Eilish’s “When the Party’s Over,” facing off against Katie Kadan, belting out “Piece of My Heart,” the 1967 Erma Franklin song, popularized a year later by Big Brother and the Holding Company, featuring Janis Joplin. During rehearsals, Legend called Max’s performance “a tour de force,” but he had a tough competitor in Katy. Boyle was up to the task, blowing all the coaches away with his performance.  Unfortunately, he was no match for Katy, who moved on to the live playoffs.

Max’s work wasn’t wasted though, as each coach got one chance to “The Steal” to snatch an artist for their teams.  Kelly used hers on Boyle, beating out Gwen for the soulful singer.  He also advanced to the next round, but now as a member of Team Kelly.

The knockout rounds continue, when The Voice returns Tuesday at 8 p.m. ET on NBC.