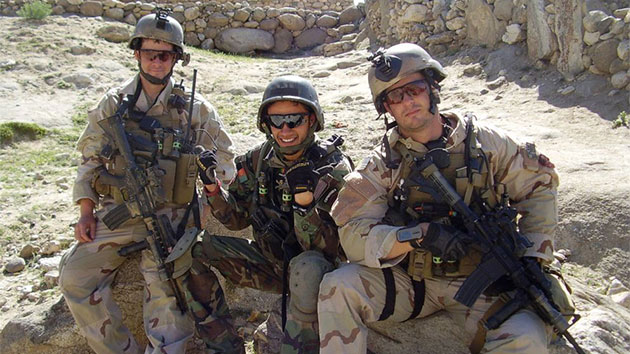 Courtesy of U.S. Army Master Sgt. Matthew Williams(WASHINGTON) — President Donald Trump will award the nation’s highest military honor to an active duty Green Beret on Wednesday for his heroic actions while serving in Afghanistan’s Shok Valley in 2008, according to the White House.Army Master Sgt. Matthew Williams, of Boerne, Texas, was critical in ensuring the evacuation of his wounded teammates from a mountain as the unit took fire from insurgents.“Sergeant Williams’ actions helped save the lives of four critically wounded soldiers and prevented the lead element of the assault force from being overrun by the enemy,” the Oct. 10 White House statement said.Williams was serving as a weapons sergeant with Special Forces Operational Detachment Alpha (ODA 3336) when the incident occurred. He was initially awarded the Silver Star for his actions, but it was determined that the award will be upgraded by the president on Oct. 30, after a review of valor awards that began under former Defense Secretary Ash Carter in 2016.Williams’ team was directed to capture or kill a high-value target of the Hezeb Islami al Gulbadin extremist group in the mountains of the Shok Valley on April 6, 2008. Inserted by helicopter into the location, the group of American soldiers and Afghan commandos took fire from “intense enemy machine guns, snipers and rocket-propelled grenades,” according to the Army.With two teammates in the lead element already wounded, the assault group was pinned down on the mountainside. Williams decided to gather a group of Afghan commandos and brave enemy fire to lead a counterattack across the valley.”At no point did I ever say, ‘This is it, this is over,"” Williams told Pentagon reporters on Tuesday.As the commandos provided suppressed fire, another team member, Master Sgt. Scott Ford, was injured by a sniper round.”Once again, Williams braved intense enemy fire to provide Ford first aid and moved him down the sheer mountainside to the casualty collection point,” the Army said.Williams said his sole focus was the evacuation of his wounded teammates, which required climbing back up the mountain while taking enemy fire to defend the lead assault element and get to their injured.”We need to do whatever is possible to get them home safely,” he said, adding, “There wasn’t a lot of dwelling on likelihoods or possibilities.”Even with the wounded soldiers at the casualty collection point, enemy fighters worked to overrun the position, the Army said. Williams led a second counterattack, fighting for several hours until helicopters arrived to evacuate the injured.Fellow Medal of Honor recipient and former Staff Sgt. Ronald Shurer II, who was the unit’s medic that day, said Williams’ casualty collection location “made a horrible position just a little bit tenable” so the U.S. could evacuate the wounded.”Again and again, as the wounded were being evacuated, Williams exposed himself to enemy fire while carrying and loading casualties onto the helicopters,” the Army said. “He then continued to suppress numerous insurgent positions by directing commando fires [airstrikes], which allowed the patrol to evacuate the wounded and the dead without further casualties.”Williams described the day as “one of the worst predicaments” of his life but said the experience helped him through his career in special operations.”Remain level headed and focus on what needs to happen as opposed to what is happening,” Williams told the Army.Williams, now a 3rd Special Forces Group operations sergeant, enlisted in the Army under the 18X Special Forces enlistment program in September 2005. He has deployed multiples times in support of U.S. operations in Afghanistan and Africa.He lives with his wife and son in North Carolina.Copyright © 2019, ABC Audio. All rights reserved.