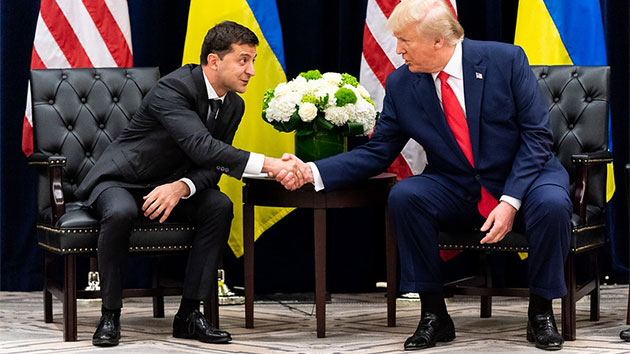 Official White House Photo by Shealah Craighead(WASHINGTON) — Alexander Vindman has a story to tell. “The privilege of serving my country is not only rooted in my military service, but also in my personal history. I sit here, as a Lieutenant Colonel in the United States Army, an immigrant. My family fled the Soviet Union when I was three and a half years old,” is how he began his opening statement Tuesday behind closed doors to House impeachment investigators.After climbing through the ranks of the U.S. Army — earning a Purple Heart along the way after being wounded in an IED explosion in Iraq — and now advising the White House on European issues as a senior member of the National Security Council, Vindman seems to have realized the dream many immigrants have.”Upon arriving in New York City in 1979, my father worked multiple jobs to support us, all the while learning English at night,” he continued, according to his prepared remarks. “He stressed to us the importance of fully integrating into our adopted country. For many years, life was quite difficult. In spite of our challenging beginnings, my family worked to build its own American dream.”I have a deep appreciation for American values and ideals,” he said, “and the power of freedom.””I am a patriot,” he said, “and it is my sacred duty and honor to advance and defend OUR country, irrespective of party or politics.”But he finds himself at the center of a political firestorm.Vindman has defied White House orders by appearing before a House impeachment probe looking into the circumstances surrounding a July 25 phone call between President Donald Trump and Volodymyr Zelensky of Ukraine.The man born in Ukraine — who fled to the U.S. — was listening to that call. What he heard alarmed him.“I did not think it was proper to demand that a foreign government investigate a U.S. citizen, and I was worried about the implications for the U.S. government’s support of Ukraine,” his statement said of Trump’s pressuring the Ukrainian government to investigate the family of former Vice President Joe Biden, who is now running for president.

Just before he testified Tuesday, Trump tried to dismiss Vindman — the first current White House official to testify in the House impeachment inquiry — as a “Never Trumper,” but providing no evidence of that.

Supposedly, according to the Corrupt Media, the Ukraine call “concerned” today’s Never Trumper witness. Was he on the same call that I was? Can’t be possible! Please ask him to read the Transcript of the call. Witch Hunt!

“For over twenty years as an active duty United States military officer and diplomat, I have served this country in a nonpartisan manner, and have done so with the utmost respect and professionalism for both Republican and Democratic administrations,” Vindman was to testify.“For many years, life was quite difficult,” said Vindman, now in his early 40s.According to the New York Times, Vindman and his father Semyon immigrated to the States with his twin brother Yevgeny, older brother Leonid and maternal grandmother. His mother died in Kyiv before they left.Vindman and Yevgeny followed in the footsteps of Leonid, earning commissions in the Army.”For more than two decades, it has been my honor to serve as an officer in the United States Army. As an infantry officer, I served multiple overseas tours, including South Korea and Germany, and a deployment to Iraq for combat operations. In Iraq, I was wounded in an IED attack and awarded a Purple Heart,” he wrote matter-of-factly.Then, as a Foreign Area Officer, a role that deals with political-military affairs, Vindman served in the U.S. embassies in Kyiv and Moscow. His last post in that role was in Washington, D.C., serving as a Eurasian specialist before being tapped to be a part of the National Security Council in 2018.Vindman’s twin brother Yevgeny is also an Army lieutenant colonel rank who works in the White House as part of the National Security Council, according to the Times. He is a lawyer handling ethics issues, and his office is across from Vindman’s.Carol Kitman, a photographer who’s online portfolio appears to document the lives of the Vindmans, wrote in a caption on her website, “The situation of their lives resonated because my mother also was brought here by family – a very small girl who had lost her mother in the old country.”Leading up to Tuesday’s testimony, Vindman’s detractors assailed his background– questioning where his loyalties lie.“It seems very clear that he is incredibly concerned about Ukrainian defense,” former GOP Rep. Sean Duffy said on CNN. “I don’t know that he’s concerned about American policy, but his main mission was to make sure that the Ukraine got those weapons.”“He has an affinity for the Ukraine, he speaks Ukrainian, and he came from the country, and he wants to make sure they’re safe and free. I understand that,” Duffy added.John Yoo, a former Department of Justice official in the Bush administration, said on Fox News Channel that it was “astounding” that Vindman, who is fluent in Ukrainian and Russian, reportedly communicated in English with Ukrainian officials about how to handle Trump’s personal attorney, Rudy Giuliani.“You know, some people might call that espionage,” Yoo said.Other Republican’s said questioning Vindman’s patriotism was “shameful.”Vindman, in his remarks, said he was proud to be an immigrant serving at the highest levels of the U.S. government.”It has been a great honor to serve the American people and a privilege to work in the White House and on the National Security Council. I hope to continue to serve and advance America’s national security interests,” he concluded.But Alexander Vindman’s story is not over. Copyright © 2019, ABC Audio. All rights reserved.