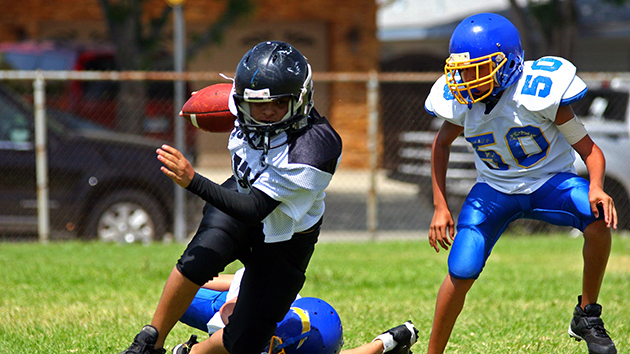 ActionPics/iStock(NEW YORK) — New York is considering a law that would make it the third state, after Massachusetts and New Jersey, to ban tackle football for children 12 and younger.Bronx Assemblyman Michael Benedetto first introduced legislation back in 2017, but it failed to gain much support. He reintroduced the bill in January, amid growing public awareness, and a growing body of research, into the dangers of concussions and their link to degenerative brain disease.On Tuesday, a hearing was held on the issue that featured testimony from doctors, coaches, researchers and ex-football players.Research suggests a link between repeated the concussions that are common in tackle football and traumatic brain injuries, which can result in memory and cognitive problems, depression and the gradual loss of brain function, according to the Mayo Clinic.One study, published in the Annals of Neurology earlier this month, found that for every 2.6 years of repeated head collisions, an athlete’s risk for developing chronic traumatic encephalopathy (CTE) — a degenerative brain disease — doubles.An earlier study, from 2017, analyzed the brains of 202 deceased football players who had participated in any level of the game and diagnosed CTE in 87% of them. The likelihood of CTE in athletes who went pro was even higher: of the 111 former professional football players whose brains were analyzed, only one did not have CTE.At present, the only way to diagnose CTE is during a brain autopsy after an individual’s death.The National Football League has meanwhile voiced skepticism about the risks that athletes face. It responded to the 2017 study by saying “there are still many unanswered questions relating to the cause, incidence and prevalence of long-term effects of head trauma such as CTE.”Copyright © 2019, ABC Audio. All rights reserved.