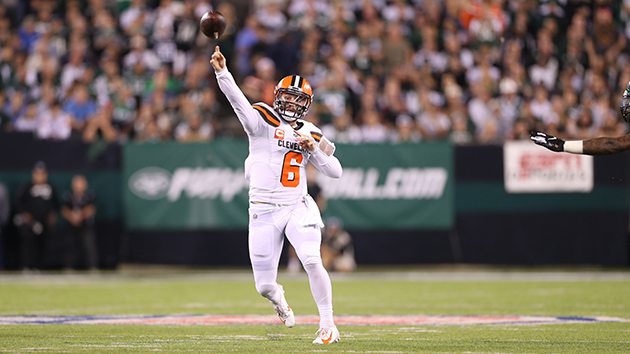 Photo by Allen Kee / ESPN Images(CLEVELAND) — Cleveland Browns quarterback Baker Mayfield abruptly ended a media session on Wednesday after a reporter asked him about the team’s sense of urgency in last week’s loss to the New England Patriots.Discussing the team’s final possession of the first half of that game, Mayfield told Tony Grossi, a reporter for 850 WKNR, an ESPN Radio affiliate in Cleveland to “Stop saying ‘but.’ I just told you the clock was running and we had a penalty.””You want to give them the ball back? No. You don’t play, you don’t know it. That’s just plain and simple.”When asked if he was pleased with the drive, Mayfield got agitated, saying “Was I happy with the drive? No, we didn’t score points. The dumbest question you could ask. What? Jesus, Tony.”Minutes later, Mayfield tweeted about the situation. “Don’t call it emotional when it’s convenient and passion when it fits. I care about winning, so yeah I’m frustrated.””If I was to act like it’s okay to lose, then y’all would say I’ve gotten complacent. My sense of urgency is at an all time high,” Mayfield said. “And if I offend anybody along the way…that’s too bad.”The Browns have disappointed to start the season, winning just two of their first seven games. That after the team was a trendy pick to win the AFC North division. Mayfield, meanwhile, has been at the center of those struggles, having thrown the most interceptions of any quarterback this season. Cleveland faces the Denver Broncos on the road this Sunday. Copyright © 2019, ABC Audio. All rights reserved.