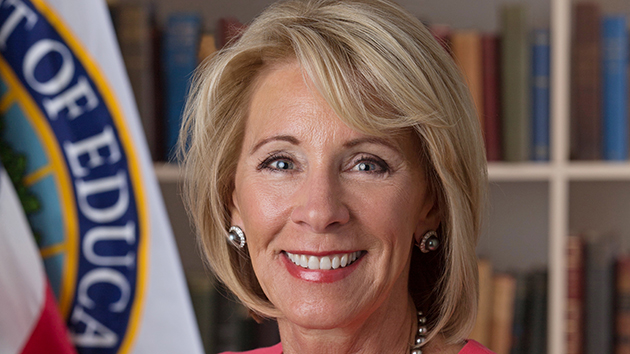 US Department of Education(WASHINGTON) — A national academic achievement test released on Wednesday showed that average reading scores for fourth and eighth graders declined from 2017 to 2019.According to the assessment, fourth graders were one point lower on average in 2019, and eight graders were three points lower.The National Assessment of Educational Progress, also known as The Nation’s Report Card, tests students’ reading and math capabilities.Education Secretary Betsy DeVos on Wednesday addressed the scores in a speech, calling the numbers a “reason for deep concern.””Our Nation’s Report Card shows that two-thirds of American students can’t read at grade level — two out of three,” DeVos said. “And only Mississippi and D.C. saw improvement this year.”She went on to say that this year’s Report Card “is essentially the same as the last one, and the one before that, and the one before that,” adding that “student achievement hasn’t changed much since 1992.””In reality, scores have not improved enough,” DeVos added. “Achievement has not improved enough. And our children continue to fall further and further behind their international peers.”Many American students who were already low-achieving are worse off today, while our best-performing students have plateaued. Those near the bottom — our most vulnerable — have fallen even further behind.”Math scores for fourth and eight graders also were little changed, as the younger pupils averaged one point better than in 2017 and the junior high students averaged one point worse.”Over the past decade, there has been no progress in either mathematics or reading performance. The lowest performing students — those readers who struggle the most — have made no progress in reading from the first NAEP administration almost 30 years ago,” said Peggy Carr, the associate commissioner for the National Center for Education Statistics, according to a tweet from the NAEP.DeVos criticized “Big Ed” during her remarks, blaming much of the educational failure on the federal government’s involvement in the education system.”More rules and more regulations. More staff and more standards. More spending and more strings,” DeVos said. “But, as the numbers in today’s Report Card reaffirm, students and teachers have gained precious little as a result.”Some of DeVos’ signature platforms during her time in the administration has been promoting school choice and Education Freedom Scholarships.When discussing the Every Student Succeeds Act, or ESSA, DeVos said the law “invites each state to determine their standards and develop innovative assessments that focus on achievement and excellence.””States can also set aside a certain percentage of federal taxpayer funding to use in new and creative ways,” she added. “There’s a student-centered funding pilot program for dollars to support students — not buildings. I like to picture kids with backpacks representing funding for their education following them wherever they go to learn. States should embrace the freedom in ESSA and look for ways to extend that freedom to empower teachers, parents and students themselves.”Copyright © 2019, ABC Audio. All rights reserved.

Climate change could aggravate over half of known human pathogens, scientists say