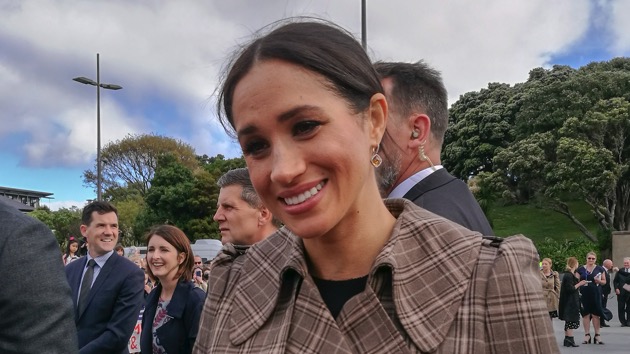 NataliaCatalina/iStock(LONDON) — Meghan, the Duchess of Sussex, delivered a personal message of thanks to the U.K. Parliament member who organized a letter of support signed by more than 70 female members of Parliament.Holly Lynch of the Labour Party, told ABC News’ Maggie Rulli that Duchess Meghan called her Wednesday morning to offer her thanks for the open letter to the duchess that begins by saying, in part, “We wanted to express our solidarity with you.”Lynch said that Meghan, 38, told her she had read the letter and felt it was “important that women stick together”.Meghan expressed that “she was grateful that we had recognized that, and asked me to pass along her thanks to the other women MPs who have signed,” according to Lynch.

Women MPs from all political parties have put aside our differences to stand in solidarity with the Duchess of Sussex today and are sending her this open letter. pic.twitter.com/ytLHG5qPf4

Lynch and 70 fellow female members of Parliament released the letter on Tuesday, more than one week after Meghan spoke candidly in a documentary about the “really challenging” time she is going through as a new mom and newlywed royal forced to handle what she described as unfair treatment by parts of the British press.”The biggest thing that I know is that I never thought that this would be easy but I thought it would be fair,” Meghan said in the documentary, Harry and Meghan: An African Journey. “And that’s the part that’s really hard to reconcile … If things are fair, that completely tracks for me if things are fair.””If I do something wrong I’d be the first one to go, ‘Oh my gosh, I’m so sorry. I would never do that,"” said Meghan, who wed Prince Harry last year. “But when people are saying things that are just untrue and they’re being told they’re untrue but they’re allowed to still say them, I don’t know anybody in the world who would feel that that’s okay. And that’s different than just scrutiny. That’s, what would you call that? That’s a different beast. It’s really a different beast.”The letter from nearly one-third of the female members of Parliament cited the “invasion” of privacy they say Meghan faces in “stories and headlines” and calls out “what can only be described as outdated, colonial undertones to some of these stories.”“As women Members of Parliament from all backgrounds, we stand with you in saying it cannot be allowed to go unchallenged,” the letter reads.”Although we find ourselves being women in public life in a very different way to you, we share an understanding of the abuse and intimidation which is now so often used as a means of disparaging women in public office from getting on with our very important work,” the lawmakers wrote. “With this in mind we expect the national media to have the integrity to know when a story is in the national interest, and when it is seeking to tear a woman down for no apparent reason.”In addition to the documentary — in which both Meghan and Harry were candid about their struggles — the letter from Lynch and her colleagues also comes after Harry and Meghan each took legal action against some members of the British press.The couple, parents of 5-month-old Archie, announced legal action by Meghan against a British tabloid over privacy concerns earlier this month. Shortly after, Buckingham Palace confirmed that Harry had also started legal action against some U.K. media outlets with regard to “the illegal interception of voicemail messages.”Buckingham Palace declined to comment on the story when asked for a response by ABC News.Lynch told ABC News that she has “been following with interest what felt like was a deterioration in the nature of the articles written about Meghan in the national press.”When she learned about legal action undertaken by Harry and Meghan, Lynch, a new mom herself to a one-year-old boy, said she felt compelled to do something to show the couple “we stand with you in solidarity and we agree it’s not appropriate.”While stressing the importance of the freedom of the press, Lynch cited press coverage of Meghan that she feels has “become increasingly sexist” and the “particular[ly] zealous” interest in Meghan’s personal life, including her relationships with members of her family, as reasons for alarm.”Toxic interest should be stripped back and become an appropriate level of interest on her role that does not undermine her character,” Lynch said.The goal of the public letter, according to Lynch, is both to get the attention of media outlets in the U.K. and to remind everyone that members of Parliament “have the ability to shape laws and regulations.””So if we feel that the coverage and the tone of the coverage continues to deteriorate and does not approve, then as lawmakers we will seek to look at regulations and guidance and all of those tools to ensure that the interest in her life is recorded in the appropriate manner,” Lynch said.Copyright © 2019, ABC Audio. All rights reserved.