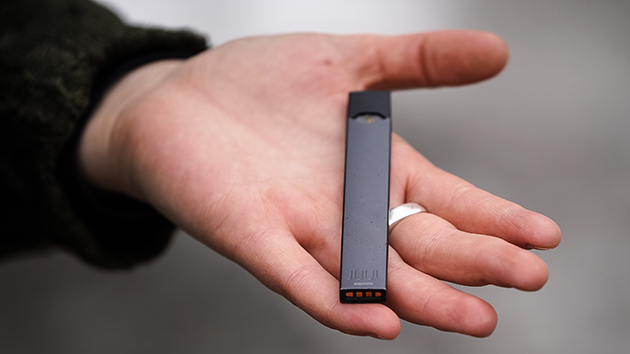 Josie_Desmarais/iStock(NEW YORK) — A former executive at Juul Labs is suing the e-cigarette manufacturer, claiming he was retaliated against for raising concerns about allegedly contaminated nicotine pods.Siddharth Breja, a former senior vice president of global finance at Juul who worked at the San Francisco-based company from May 2018 to March 2019, filed the lawsuit in the U.S. District Court for the Northern District of California on Tuesday. The complaint alleges that Juul sent to market at least “one million mint-flavored e-cigarette nicotine pods that it admits were contaminated, and against Mr. Breja’s insistence and protests, refused to recall those contaminated pods or even issue a product health and safety warning.”Breja claims in the complaint that he was fired “in retaliation for whistleblowing and objecting to the contaminated pod shipment and other illegal and unsafe conduct.””Mr. Breja became aware of very concerning actions within the company that could be jeopardizing the health of millions of Juul users,” Breja’s attorney, Harmeet Dhillon, told ABC News in a statement Tuesday. “Mr. Breja performed his duty to shareholders, the board, and the public by reporting these issues internally, expecting that Juul’s senior management would do the right thing. Instead, Juul fired him under concocted, false pretenses, and then sought to smear him to justify its misconduct. Mr. Breja looks forward to his opportunity to seek justice in the courts and to hold Juul accountable.”A Juul spokesperson told ABC News in a statement Wednesday that “Breja’s claims are baseless” and “the company will vigorously defend this lawsuit.”According to the court documents, Breja spoke out in an executive team meeting in early February against the company’s intentions to resell “expired or nearly expired pods.” He also claims he suggested that the company include an expiration or “best by” date on the packaging, or at least a date of manufacture. The complaint alleges that Juul’s then-CEO Kevin Burns responded to Breja’s idea by saying that “half our customers are drunk and vaping” so “who the the f— is going to notice the quality of our pods?”Burns stepped down on Sept. 25 amid backlash against Juul’s marketing practices as well as a wave of lung illnesses and multiple deaths linked to vaping; although recently released data from the U.S. Centers for Disease Control and Prevention indicates that the vast majority of the illnesses are associated with vaping products containing liquid THC, the main psychoactive component of cannabis. Juul’s allegedly contaminated pods have not been tied to any specific illnesses or deaths.Burns was replaced by K.C. Crosthwaite, an executive from tobacco giant Altria Group, which owns a 35% stake in Juul. Burns could not be reached for comment Wednesday.Breja alleges in the lawsuit that, during an executive team meeting in mid-March, he learned some batches of mint-flavored e-cigarette liquid had been found to be contaminated and approximately 250,000 refill kits, the equivalent of one million pods, were already manufactured with the tainted product, shipped to retailers and sold to customers.Breja claims he was asked to charge the e-liquid supplier, Alternative Ingredients, some $7 million for having provided the contaminated batches. He was further concerned by “this hypocritical approach of not informing the customers about the contamination on one hand (claiming it was not a serious issue) and charging the supplier for it on the other hand,” according to the complaint.A spokesperson for Alternative Ingredients did not immediately respond to ABC News’ request for comment Wednesday.Later that day, during his regular weekly meeting with his supervisor, Juul’s then-chief finance officer Tim Danaher, Breja “protested Juul’s refusal to issue a product recall for the contaminated pods, or at a minimum, issue a public health and safety notice to consumers,” according to the complaint.Breja alleges that Danaher was “angered” by his comments and “questioned his financial acumen” since his suggestions would lead to billions of dollars in lost sales, a tarnished company image, damage to brand reputation and a significant reduction in Juul’s then-$38.5 billion valuation.

Juul’s CEO, Crosthwaite, reportedly announced Tuesday that Danaher is leaving the company and will be replaced by insider Guy Cartwright, who was previously a transformation and operations officer. Danaher could not be reached for comment Wednesday.According to the court documents, Breja was terminated on March 21, a little over a week after he expressed his concerns to Danaher. Breja alleges that one of what he calls the “fabricated reasons” that he was given for his immediate termination was that he had misrepresentation himself as the chief financial officer at Uber, the San Francisco-based ridesharing company where he had previously worked. But Breja alleges he never made such a claim and rather accurately stated that he “operated as the CFO of a division of Uber.”Breja is seeking compensatory damages, among others, for the alleged violations of law. He is also asking for injunctive relief that includes, but is not limited to, requiring Juul to create a hotline for employee whistleblowers, to issue a prompt recall of the contaminated pods and to reinstate him.In the statement to ABC News Wednesday, the Juul spokesperson said Breja was terminated “because he failed to demonstrate the leadership qualities needed in his role.””The allegations concerning safety issues with Juul products are equally meritless,” the spokesperson said, “and we already investigated the underlying manufacturing issue and determined the product met all applicable specifications.”Copyright © 2019, ABC Audio. All rights reserved.